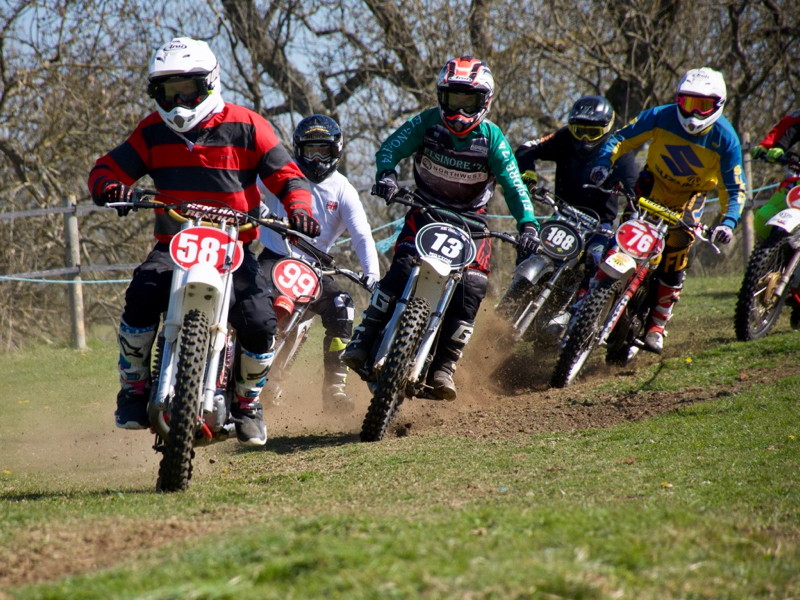 Bath Classic MCC hosted the first round of the 25th Anniversary AMCA/CDB British Classic MX Championship. The traditional season opener  at the grassy hillside track at Yatton Keynell near Bath was held in perfect weather with a gentle breeze to blow much of the dust away. The introduction of a full Pre 60 class and an increase in the Pre74 entry meant the two championship races had to be split into one for Pre60/65/68 and one for Pre 74 classes instead of the two mixed class races in order to accommodate the higher number of entries.

The Pre74 race kicked off the programme and Kristian Marshall on his ex Ian Hall 380cc CZ made the holeshot leading three times Pre74 champion Kris Winder on the Elsinore Honda. Fast starting Greg Speed the reigning Pre 68 champion on a  Cheney BSA and newcomer Luke Parsons on his 400cc Suzuki were pushing at the front. CZ, Honda, BSA, Suzuki, Ossa, Husqvarna, and Greeves were all represented on the grid. The Honda of Kris Winder doesn’t always make the starts but you expect him to come through, however, Marshall got his head down and managed to maintain a few bike lengths for the first half of the race. Behind the front two, newcomer to the championship Allen Waring on only his second CZ ride pulled through to third whilst Sam Oliver on another CZ got past Speed into fourth. Aaron Graves after a poor 2019 on a Maico finished a strong fifth on his Faber BSA. Jos Goddard’s completed the top six having upped the pace of his 400cc Greeves since the 2019 championship.

The Pre60, Pre65 and Pre68 race was run as one race with the three classes scored individually. Former Pre65 champion Aaron Graves made the hole shot on his Dad’s 500cc Faber BSA, he said he was just testing it for ‘power and braking’. The bike certainly had the power as he led away Ricky Pedder on his 650cc Triumph Metisse and Lewis Bell on his 580 cc Jawa Metisse. Graves was at his best riding superbly to keep Pedder and Bell behind as the three riders looked for the top spot, however, Keith Best on his 250cc CZ came through from mid pack on lap one to add a fourth member to the group with four laps to go and then he picked off Bell, Pedder and Graves one by one through to the penultimate lap, timing the charge to perfection to win by 0.8 of a second.

Best was the top Pre68 from Graves with last year’s runner up Mitch Harris third. Pedder and Bell were the top Pre65’s with Keith Plumtree a distant third. Joe Chell on his Tribsa finished an impressive eighth in the race as the top Pre60 , Micky Allen on the mighty BSA Gold Star held second in class for much of the race being stalked by the Tribsa of Simon Chell who took the place with two laps to go but Allen held onto third ahead of Ian Lovelock. Greg Speed’s outing on Colin Hill’s Mabsa in the Pre60’s didn’t go as planned as the exhaust escaped from the Matchless’ barrel early in the race meaning he was down on power, he did manage to get to the end but the best is yet to come from this combination!

This was a strong start to the anniversary championship but series coordinator Dave Gittins is looking forward in particular to Pre 68 riders Chris Collins and George Gorvett and the top four riders from the 2019 Pre65 class including champion Gene Womack joining the series for the next round at Acorns. The next round is hosted by Acorns MCC at Butterton on 13th June rapidly followed by Westmorland MC’s round on the Saturday of their two day meeting on 26th and 27th June