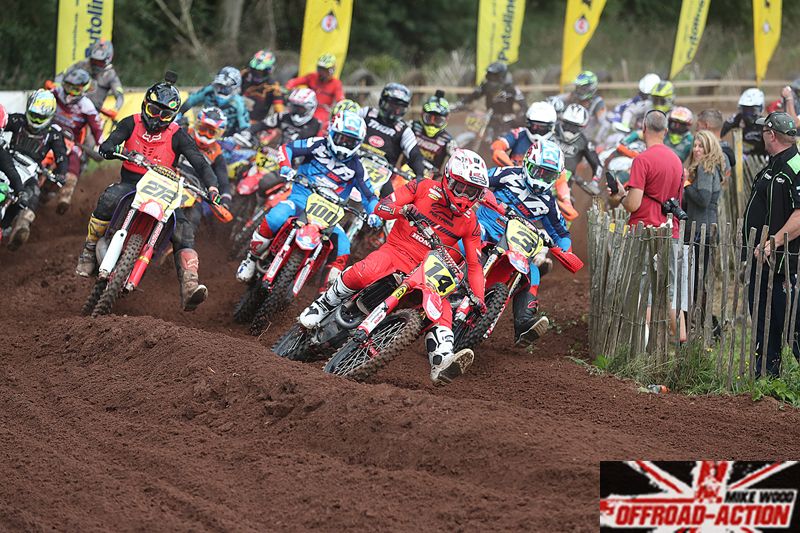 With three rounds of the AMCA British Motocross Championship powered by Datatag and supported by Dunlop on consecutive weekends, it’s going to reveal the riders who really are the serious 2020 title contenders. To be in that crucial final shake-up though it will require them to be right at the very top of their game, being physically, mentally and technically prepared for the challenge ahead!

So with very little room for error, crashes and mechanical gremlins, the first hurdle in this tough trilogy took place on Sunday at Long Lane, near Telford. Taking the overall victories were Luke Burton (Geartec Honda), Jamie Wainwright (Wainwrights Plant and Haulage KTM), Shane Carless (FUS Marsh MX Husqvarna), James Lane (LRT Midwest Husqvarna) and Yarin Evans (J4M54 Practice/SRH KTM). For Burton, Carless and Evans in particular the day proved to be extra profitable as their wins hauled them up the standings and into the pole positions of their respective Championship classes.

Opening proceedings at Long Lane was a typically exciting 125cc contest as the fast starting Nathan Bache quickly hit the front chased hard by early series leader Jordan Wright and Damon Strydom. Four laps in though and Wright crashed heavily in the whoops section before Strydom then passed Bache for the lead. The man on a serious charge in this moto was Shane Carless, gating down in 12th he quickly reeled his rivals in and was about to make a move on Strydom when the race was red-flagged and halted in the closing stages. So on completion it was Strydom taking the win and his maiden AMCA Championship success from Carless, Bache, Jimmy Margetson, Shane Holmes the 2011 AMCA 125cc Champion and Jonathan Roderick-Evans.

In moto two it was Carless taking the win after leading just about all of the way. Up until midpoint, Bache had looked the most likely runner-up until crashing heavily and snapping his handlebar clamp. Although Nathan gallantly tried to still score points it was not to be as Travis Steels took 2nd from Matt Ridgway, Chris Povey, Roderick-Evans, Wright bravely recovering following his moto one crash, Margetson and Strydom.

After having suffered from spills in the opening two moto’s, Margetson was right on it for the last clash of the day. Passing that man Bache on lap five, Jimmy took control of the contest and looked set for the win only to be passed by the hard charging Carless on the final lap and just two corners from home. In this one, Steels was 3rd with Holmes having another great ride in 4th and also getting the better of Bache, Strydom, Clinton Barrs and Luke Newman. In the Championship standings, Carless now leads the way 22 points clear of Margetson with Strydom in 3rd.

With a typically stylish and controlled performance, Luke Burton scorched to three great MX1 wins at Long Lane and thus also move to the top of the early standings. In the opening moto, Luke led from gate to flag as James Dodd slipped back to 5th after looking set in the runners-up position early on. Ashley Greedy, Adam Chatfield and Josh Waterman all relegated Doddy with the ride by Waterman being particularly eye catching as he moved menacingly up from 10th. In this ultra-competitive class, Nev Bradshaw, Corie Southwood and Tommy Alba were next up.

In a dramatic start to MX1 moto two, Bradshaw and Dodd made contact on the run into the opening turn, the result being that Dodd lost several of his front wheel spokes. So as Dodd stopped for a quick wheel change, the pack raced off into the distance with Burton again in total control. In this one, Bradshaw got his ‘big Red CR500 Honda’ up into 2nd spot with Chatfield, Greedy, Waterman and co in the mix as Benjamin Knight, Will Hughes and Scooter Webster rounded off the top ten.

With his favourite 2T Honda having blown a gasket in that moto two, Bradshaw’s participation in the crucial last MX1 moto of the day was now in serious doubt. However good friend James Painton was to come to his rescue offering the use of his own CR500. Accepting the kind offer, Neville got home in 4th as Burton passed Alba and Dodd to earn another impressive victory. Having his best ride of the day, Southwood eventually got up to take  2nd from Dodd with Chatfield, Greedy, Waterman and Hughes next in the placings. But for Bradshaw that bike loan from a generous Painton could yet prove to be absolutely crucial in the title race as it’s now very tight at the top. Just 6 points separate leader Burton, Waterman and Nev, it’s all to play for!

With another maximum score, Jamie Wainwright has marched clear at the top of the AMCA MX2 standings. In the very early stages of moto one, Wainwright had James Smith on his tail before he dropped down to 10th. So as Wainwright raced clear and Henry Williams held an equally safe 2nd spot, the main focus was on a fantastic tussle for 3rd featuring Josh Coleman, Jordan Eccles, Luke Dean, Ryan Crowder and Lewis Dowdeswell. On completion, the determined Coleman won that battle royale as Jansen Day and Cory McShane also finished inside the top ten.

Gating in12th, Wainwright quickly got up to 5th spot in MX2 moto two before passing Day, Coleman, Dowdeswell and leader Dean. By lap three, Jamie was in control for the win but the rides of the moto came from Crowder and Eccles. After crashing early on the opening lap, Crowder came storming back from last to earn a fantastic 6th whilst Eccles recovered from 18th to bag a strong 5th.

In the last MX2 clash as Wainwright gated in 11th, Eccles made a jet propelled start to quickly earn some daylight at the front of the pack. Looking to have the contest under control he appeared well set to inflict the first Championship defeat of 2020 on Wainwright until it all went wrong with just two laps remaining. Following a crash, Jordan dropped down to 3rd just behind winner Wainwright and Crowder. Again in the mix were Coleman, Williams, Day and Dean as Lee Truman had his best ride of the day for 8th. On the podium it was Wainwright, Coleman and Eccles whilst in the Championship table Coleman now holds 2nd, 46 points off top slot and just ahead of 2T aces Crowder and Dean.

The Lane brothers again took the top two slots in the Vets class at Long Lane but were made to work hard for their spoils by the fast starting Paul Burn. In a classic moto one, Burn led the way before being passed by both Simon and James Lane. Undeterred, Paul fought back to reclaim the advantage with just two laps remaining. Then in a frantic finale, Burn again dropped to 3rd as Simon leapt past James to snatch the win on the final circuit, great action! Also starting the day in style, Sean Smith got home in 4th from John Barnes, Chris Jones, Anthony Bennett and Kev Rogers.

Making a quick getaway, Simon Lane grabbed the final moto holeshot before brother James found a way through after just two laps. Form her onwards, James led all the way as Bennett had a great ride for 3rd ahead of Burn, Rogers, Jones, Barnes, Staples and Gareth Dunsford. With the Lane boy’s already beginning to break clear at the top of the title standings, Burn has now moved up into the Championship bronze medal position.

Following Sunday’s racing there’s now a new leader in the Youth class as Yarin Evans has took control. Falon Baillie was fastest away though in moto one at Long Lane before Evans surged to the front on lap two. Remaining smooth and composed, Yarin then raced onto victory 8 seconds clear of Championship pace-setter Joel Fisher as Lewis Roden took 3rd with Baillie 4th, Caleb Greaves 5th, Tyler Smith 6th and Oliver Rigby 7th.

Baillie was again the holeshot King in moto two but by the completion of the opening circuit, Fisher was dictating proceedings. From here onwards he cruised to a massive win from Evans, Greaves, Baillie, Rigby and Smith. Looking favourite to then extend his series lead even further, Fisher led the final Youth 85cc clash before it all went wrong. On lap three, Joel picked up a rear-wheel puncture and so with the tyre threatening to vacate the rim, he had to nurse his bike home for 13th place. Taking the win was Evans from Smith, Rigby and Baillie. That result meant that Evans now leads the Championship with Fisher just 13 points in arrears as Roden holds third.