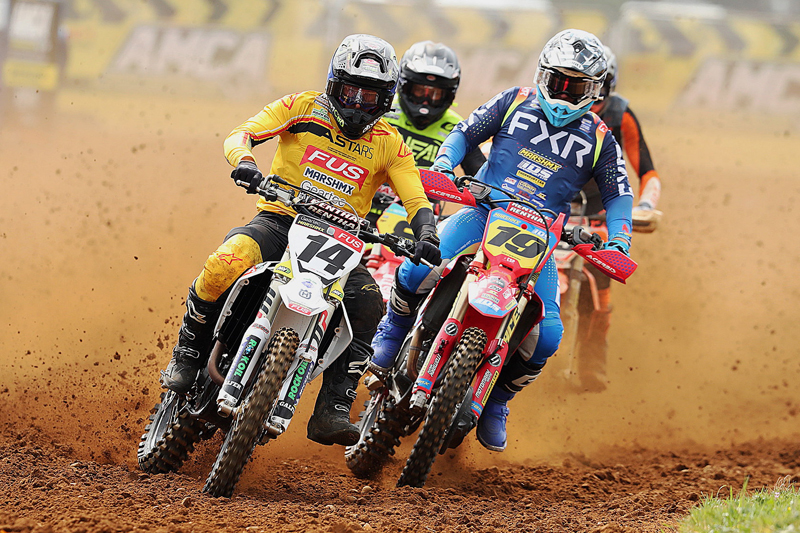 Two riders who have been to the very top of the professional British motocross ladder earlier in their careers were the stars at a thrilling opening round of the 2022 AMCA series held at Culham last weekend. Both Nev Bradshaw and Kristian Whatley can rightly claim in motocross terms to have been there, done it and got the tee-shirt!

At this AMCA bash sponsored by Dunlop and now also supported with extra prizes from Planetmoto, Race Wear X, Muscle Doctor and Donjoy, those two experienced campaigner Bradshaw and Whatley bagged the overall wins in the respective MX2 and 125 classes with Bradshaw remaining unbeaten. Matching that with star performances of their own was the Youth 85cc victor Ollie Bubb and Vets ace Phil Mercer, both taking victory with maximum points. In the remaining MX1 class, six times AMCA Champion Luke Burton started 2022 in style with top slot.

Going back though to the dynamic duo of Bradshaw and Whatley, they were competing in classes that were over-subscribed and stacked with quality. So before the racing could commence qualification was required to decide who would take the 40 spaces available on the start line. When the gate finally dropped for moto one in MX2, Bradshaw was stretching that throttle wire of his Yamaha 250cc 2T to the max, getting an absolute flyer, generating terrific speed and hitting the front. And that’s just where he stayed, leading the contest all the way to the flag ahead of defending AMCA MX2 Champion Shane Carless. One of several riders to drop down from MX1 to MX2, Tommy Alba looked very comfortable aboard the 250F in this moto, eventually taking 3rd after seeing off the very impressive Kacey Hird. Also in the mix in this frantic scrap were Henry Williams, Ray Rowson, Jimmy Margetson, Rory Jones and Kieran Banks, making his MX2 Championship debut after winning the 125cc title last year. Also new to this AMCA class was Jake Preston, but for him it was not to be such a happy start. Being involved with several others in a collision early on lap one, Jake had to work very hard for a 16th place finish.

In the second MX2 clash, Jack Timms, Corey Hockey and finally Nev Bradshaw took turns to lead. Initially Nev had gated in 6th, two places ahead of Carless. Both lads then got on a serious charge with Shane eventually taking a strong 2nd and closing hard on Nev the leader. The spectacular Jones was to be the 3rd place finisher as early leader Hockey took 4th. Williams, Preston, Alba, Hird, Banks, Josh Peters and the other early leader Timms filled the next seven placings.

Showing that he was dialled into his 250F after racing the Fantic 125cc in 2021, Banks grabbed the moto three holeshot before quickly being passed by Bradshaw and that’s the way it stayed. With another great ride, Alba took 3rd as Carless again worked hard to move through and follow him home after earlier gating in 8th. After finishing 3rd in the 2021 MX2 title race, Williams fell on lap one in this moto. Right down in 36th place, Henry charged back to eventually take 16th spot.

After safely negotiating qualifying, Kristian Whatley got his 125cc campaign off to a flyer with victory, but boy was he made to work hard! In a classic encounter, young Joel Fisher, Matt Bayliss and Matt Ridgway kept Mr Whatley honest all the way to the chequered flag. Eventually, Kristian took the win less than a second clear of Bayliss with Fisher 3rd. Having his first ride since 2019, Chris Povey started strongly taking 5th just behind Danny Lanfear. In this all-action moto one, Luke Dean, Harrison McCann, Kieran Cooke and Liam Gale were also right in the mix and at the top end of proceedings.

Whatley, Fisher and Bayliss were at it again in 125cc moto two. For six pulsating laps, Fisher led the way until Whatley dug deep, used that vast racing experience and found the route to pass first Bayliss then fast Fisher to thus record another win. Most of the above mentioned names were also right on the gas and again inside the top ten, joined on this occasion by Louis Vincent.

Proving that he certainly had the speed and the fast lines around the Culham circuit, Fisher then led moto three of the 125cc class for seven laps, resisting some close attention from the hard charging Bayliss. Although the talented Joel was finally relegated down to 2nd, he did still get the better of Whatley who had to settle for 3rd in this moto. Having an impressive weekend, Lanfear got home 5th with Dean enjoying his AMCA 125cc debut after dropping down from the MX1 class having another strong ride. For Povey though, this moto was not to be quite so productive, relegated down to 16th after a big crash when earlier holding 4th spot.

There was no doubt about the winner of the Youth 85cc class as Ollie Bubb won all three moto’s in super style. This talented youngster was never headed and his smooth, classy style was certainly a joy to watch! In the first 85cc moto of the weekend, Oakley Kettle, Wyatt McGregor and finally Sebby Moore all took up the challenge to be the flying Bubb’s closest chaser. On completion of the contest it was Moore who crossed the line in 2nd as Jack Evans was next best from McGregor and Kettle who was the 2021 AMCA SW85cc Champion.

In the remaining two clashes, McGregor was to take the runners-up position with all of the above lads plus Harrison Davies always in the mix. This contest also included a separate class for the SW85cc pilots with Oliver Bebb taking top slot from Harley Piper and Lewis Day.

With Phil ‘Factory’ Mercer set to defend his AMCA Vets title, the main challenge to his supremacy was again expected to be provided by Gary Davies, now a fully- fledged member of Lee Jones Apex GasGas UK team. Unfortunately though, just a couple of days before the Culham event, Gary was to suffer a devastating blow, suffering major knee ligament damage whilst out practising ironically at Apex! Undeterred though and with his painful injury heavily strapped, Gary still contested round one taking 3rd overall behind the unbeaten winner Mercer and fast Shane Holmes on his tiny 125cc KTM. Indeed Holmes, a former AMCA 125cc Champion really mixed it at the front ensuring that Mercer and co had to be at their very best in the race for glory! Throughout the weekend, Holmes, Davies and the fast starting Simon Lane all took turns to get ahead of Mercer. However the classy ‘Factory Phil’ always appeared to have that little extra speed in reserve, timing his passes to perfection.

In this class, Jamie Powell was making his debut after recently turning the age of 40. Vastly experienced and a top AMCA Championship rider for many years, Jamie was expected to be a likely contender for honours at Culham but it just did not happen for him! Falling very early in moto one he had to fight from a distant last back to 18th. After taking 4th in the second clash, Jamie did not compete on day two. So in the overall stakes it was instead those ever reliable and consistent brothers, James and Simon Lane who threatened the top three as Marc Roe, Sean Smith, Matt Chaplin, Alan Jones and Brian Staples completed the top ten.

Unfortunately this class was marred on day two by an horrific crash involving Andy Marchant. With the Midlands based rider requiring urgent, critical care, the meeting at this point was then rightly abandoned. Since that accident, Andy has now tragically lost his brave battle to survive, rest in peace #800. Our thoughts are with all of your family!

Although the MX1 class was to provide the smallest entry of the weekend, the racing was simply red-hot! In the opener, Josh Waterman grabbed the holeshot before new boy on the AMCA scene, Jake Shipton slipped through to take control. By the completion of lap one, Luke Burton and Tony Craig had also passed Waterman. From here onwards that’s pretty much how it remained with Shipton earning his maiden AMCA moto win. Gating 7th, James Dodd got up to 5th with defending Champion Ashley Greedy, Mark Young and Josh Taylor next up.

Moto two and Burton hit the front ahead of his FUS Marsh Geartec Husqvarna teammate  Shipton, Waterman, Greedy and Dodd. Seven laps in and Shipton was suffering from severe arm pump and having hardly had no race action for the last two years he dropped down to 4th. Meanwhile at the front, Waterman was rapidly reducing the deficit on leader Burton before making his move with just three circuits remaining. So at the flag, Josh was the victor from Burton with Dodd, Shipton, Greedy, Criag , Taylor and Adam Wells next home.

In Sunday’s opener, Waterman grabbed the holeshot only to slip off midway on lap one and thus drop down to 6th. So it was Shipton leading from Burton, Craig and Dodd but once again that dreaded arm pump was to set in and spoil his race. Gradually going backwards to an eventual 5th, Jake lost two places in the final couple of laps as a great battle between Waterman and Dodd helped haul them up the leaderboard . Josh was to eventually earn 3rd with James 4th as Burton took the win and the round one overall verdict.

All groups in the 2022 AMCA Championship now  include classes within a class thus ensuring that every rider regardless of where they are placed have something to really race for. This new move incoprorates entrants who finished outside the overall top 20 places in 2021 for MX1 and MX2, riders under 18 in 125cc and pilots over 50 in the Vets.

Next up it’s a visit to the Gloucestershire venue of Brookthorpe, it’s going to be good!