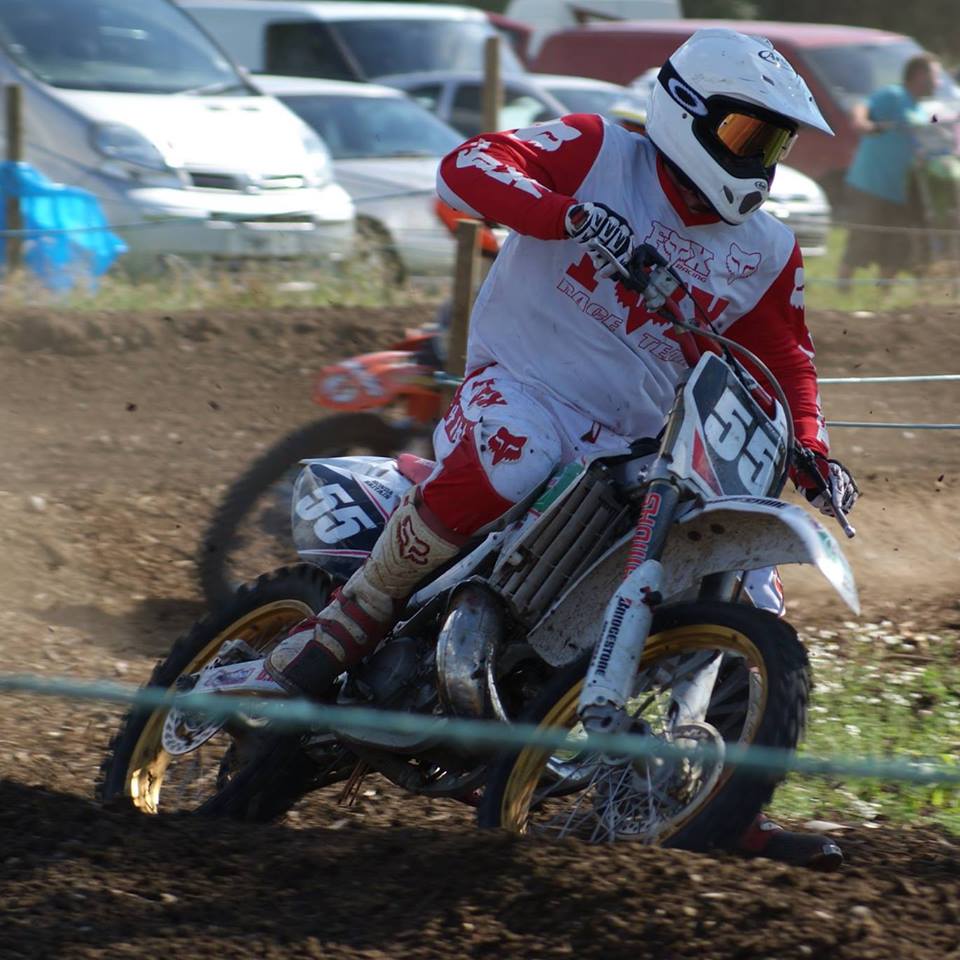 Burntwood Barracudas are sad to inform you of the death of Paul Lawrence. Paul passed away peacefully at home on Monday 2nd May following a year long battle with cancer.
A member of Tamworth and Burntwood clubs in the late 70's and 80's, Paul came back to the sport 6 years ago and rejoined the Barracudas where he has made the clubman of the year title his own. He will be greatly missed by all and our thoughts are with his family at this time.
Paul's funeral will take place at 14.15 on Monday 16th May at Bretby crematorium DE15 0QE, and after at Lichfield hockey club WS13 7SG.
Dress code casual, MX or Hockey shirts preferred.

FUS Moto4 Fro Husqvarna rider Jack Cox bagged a superb 2nd overall in the latest IMBA MX1 European Championship round held at Dalecin in the Czech Republic on Sunday. Jack reeled off a very strong 3/4/2 scorecard to also move up to 3rd in the title standings and is now just 36 points behind leader Belgian Vincent Collett.

On the fast, stony Dalecin circuit, Edward Briscoe, Scott Bates, Joshua Scott and Sam Smith also gave it their all to get home in respective 13th, 16th, 19th and 23rd places. Next up for Team AMCA Great Britain is their home round at Lower Drayton Farm, Dunston, Staffordshire on July 31st.

Many Congratulations to James Hanscomb the AMCA Youth 85cc/150cc Champion

Many congratulations to James Hanscomb who was crowned the 2016 AMCA Youth 85cc/150cc Champion at Lower Drayton on Sunday. In the three completed rounds, young James superbly won all nine moto's to stamp his authority on proceedings. Well done to all the Youth riders who raced in the series, producing plenty of exciting action along the way, you are the stars of tommorrow!.

It's Czech Mate for IMBA MX1

After their opening round trip to Denmark, the lads representing AMCA Team Great Britain in the IMBA MX1 European Championship face another long road trip this weekend as they are off to Dalecin in the Czech Republic. Following round one in Denmark, FUS Moto4 Fro Husqvarna rider Jack Cox is the top Brit holding 8th spot with Ed Briscoe just one place further down in 9th, Sam Smith 15th, Scott Bates 16th and Joshua Scott 21st.

Leading the way at present is Dutch rider Michael Hool on a maximum 180 points. Thankfully for our Brits once they return from the Czech Republic their next IMBA action will be the home round at Lower Drayton Farm, Penkridge on July 31st.

The AMCA title race is ON!

It’s time to rise the revs, stretch the throttle wire and drop that clutch as the 2016 AMCA British Motocross Championship powered by Datatag and supported by Dunlop kicks off this coming Sunday, May 1st at Dunston  Staffordshire. And, what a series it promises to be with arguably the strongest ever line-up in the AMCA history! Indeed with a talented and exciting depth of quality in both the MX1 and MX2 classes, picking an eventual winner appears to be just about an impossible task!

After claiming the 2015 AMCA MX1 title, Luke Dean will be back to defend his title but just look at some of the opposition! Just for starters there’s the hard charging MX1 regulars, Richard Cannings, Clinton Barrs, Luke Meredith, Scott Bates, Ed Briscoe, Andrew Smart, Ryan Morris and returning from injury the very fast Jack Cox. Moving up from last year’s MX2 to the 450F machines you have reigning AMCA Champion Luke Burton who has already bagged the early season Superclass crown, Matt Ridgeway and young Ryan Crowder whilst four-times AMCA 2T Champion Adam Harris on his fast 250cc Yamaha two-smoker also now takes on the big MX1 boy’s. The main threat though to Dean’s hopes of retaining the crown could well come from the new riders joining the AMCA series which include Shane Carless, John May, James Dodd, Curtis Blamey and Gary Gibson. What a line-up the 2016 AMCA MX1 Championship chase will provide, the racing will surely be ultra-competitive and very red hot!

On what promises to be a very busy day of top-class action, Sunday’s event also includes the opening round of the AMCA 2T and Veterans Championship along with the final bash in the early season AMCA Youth 85cc/150cc series. There’s definitely going to be new name on the AMCA 2T winner’s trophy in 2016 with Harris having moved into the tough MX1 class but who will it be? Leading the entry is 2014 AMCA MX2 Champion Ben Saunders, his possible closest challenge likely to be provided by the likes of James Lane, Jamie Powell, Jack Waterman, Matthew Bath, Rian Warren and co. Over in the Vets, Simon Lane will be after title number three with all the usual suspects such as Brian Staples, Garry J Williams, Gary Jones, Matt Ryder, Sean Smith, Shaun Hayles and Martin Atherton on duty. Joining the 2016 Vets chase though are a couple of very interesting contenders in former Top 35 ACU runner Matt ‘Flash’ Gordon and Danny Blakeley.

After two completed rounds of the Youth 85cc/150cc title race, James Hanscomb leads the way with a perfect unbeaten score. In all six moto’s contested to date, Lloyd Duggan-Thomas as finished as runner-up behind Hanscomb whilst other riders to look out for include Lewis Glynn, Finn Corbijn, Max Lewis and Ryan Lancelotte.

Sunday’s event is certainly not to be missed so if you’re  after top quality, highly competitive racing then get along to  Dunston for this AMCA opener, it’s sure to be an absolute cracker! The circuit will be signposted  from both Penkridge Town centre and junction 13 of the M6, the closest postcode being ST19 5RE. Admission charges for the event are £5 Adults, £3.00 OAP’s and Children aged 12-16 with Kids under 12 getting in for FREE. 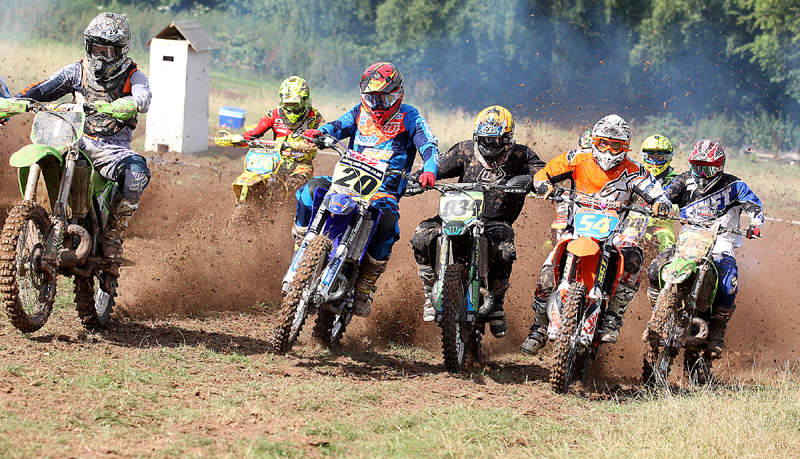 VETERANS OVER 50 CHAMPIONSHIP - OPEN TO ALL AMCA JUNIOR & SENIOR RIDERS

The South Shropshire Group are running an 8 round Veterans Championship for over 50 year old riders, which will be open to all AMCA riders who are eligible. This will only be open to Senior and Junior level riders, no Experts.

6 rounds to count - Over 50's Junior and Senior, no Experts - OPEN TO ALL AMCA RIDERS.

Dates are provisional subject to change.

ALL EVENTS BELOW CAN BE ENTERED VIA THE FOLLOWING LINK:- http://www.amca.uk.com/south-shropshire

It’s round three of the 2016 AMCA Sidecar Championship this coming Sunday, April 24th as the brave three-wheeled warriors travel to Upavon in Wiltshire. After two completed rounds it’s the pairing of Jack Etheridge/Scott Grahame who lead the way on 145 points followed by David Keane/Paul Horton 133, Mike Hodges/Liam Hodges 112, Dan Foden/Josh Haynes 108 and George Kinge/Zac Snell 103.
The chalky Wiltshire venue will be signposted from the A342/A345 Upavon junction with a postcode of SN9 6EF.

For all you EVO racers, there’s a great new mini four round series about to kick off in the West Country. Organised by the UK EVO MX Club who are affiliated to the AMCA, the series as already attracted over 200 competitors for the opening round which is due to take place this Sunday, April 24th at North Nibley. Further events will then follow at Ford(May 22nd), a new venue at Wickwar(June 5th) before returning  to Ford for the final action on the 10th July. All of the usual EVO classes will be catered for as well as a modern 2T group. The people to contact if you would like to be involved are either Mark Dudley or Tania Sellars on 0797 7944636.

IMBA Opener for MX1 and Sidecars

Sunday, April 17th saw the opening IMBA European Championship action of 2016 for both the riders in MX1 and Sidecar Classes. Whilst the two-wheeled solo boy’s made the long trip to tackle the Danish sand at Grenaa, the three-wheeled warriors travelled to the superb circuit of Wohlen in Switzerland. As usual all of the lads representing AMCA Team Great Britain gave it their all, returning home with a rather mixed bag of results.

In MX1, Jack Cox making his debut for FUS Moto4 Fro Husqvarna was the highest finisher in Denmark with a 8th place overall finish. Jack certainly endured a rather eventful day in the sand, grabbing the holeshot in moto one before crashing then losing all of his engine oil when the plastic filler cap broke!. Bouncing back in style, the Midlander bagged 5th in moto two then grabbed the final race holeshot and led until three laps from home. Unfortunately severe arm-pump then kicked in dropping him down to a 5th place finish yet again.

Of the other Brits on duty, Edward Briscoe was 9th, Sam Smith on his IMBA debut a very impressive 15th, Scott Bates 16th and Joshua Scott 21st. Next up for the MX1 pilots in another long haul to Dalecin in the Czech Republic on May 8th.

After finishing a very impressive 4th overall in the 2015 IMBA European Sidecar series, Jack Etheridge/Scott Grahame started the new campaign with another strong performance. On the Wohlen circuit in Switzerland, Etheridge was 4th whilst the pairing of David Keane/Paul Horton blasted to a strong 9th overall. Also competing in Switzerland was the battling British crews of George Kinge/Zac Snell, Michael Hodges/Liam Hodges and Dan Foden/Joshua Haynes finishing in 15th, 17th and 26th places respectively. The chairs next IMBA action will be on 12th June at Baguer Pican in France.

With a growing interest in the 2stroke motocross scene, long standing AMCA licence holder Andrew Mantle is trying to gauage interesting in holding a 2stroke event for senior and expert riders.

Andrew is after your feedback and thoughts on such an event and would love to hear from the 2stroke riders who may be interested in supporting/riding the event.

Andrew is looking to gather riders thoughts and then liaise with his own club or groups to then either run a one-off event, or event a host of events depending of course on interested.