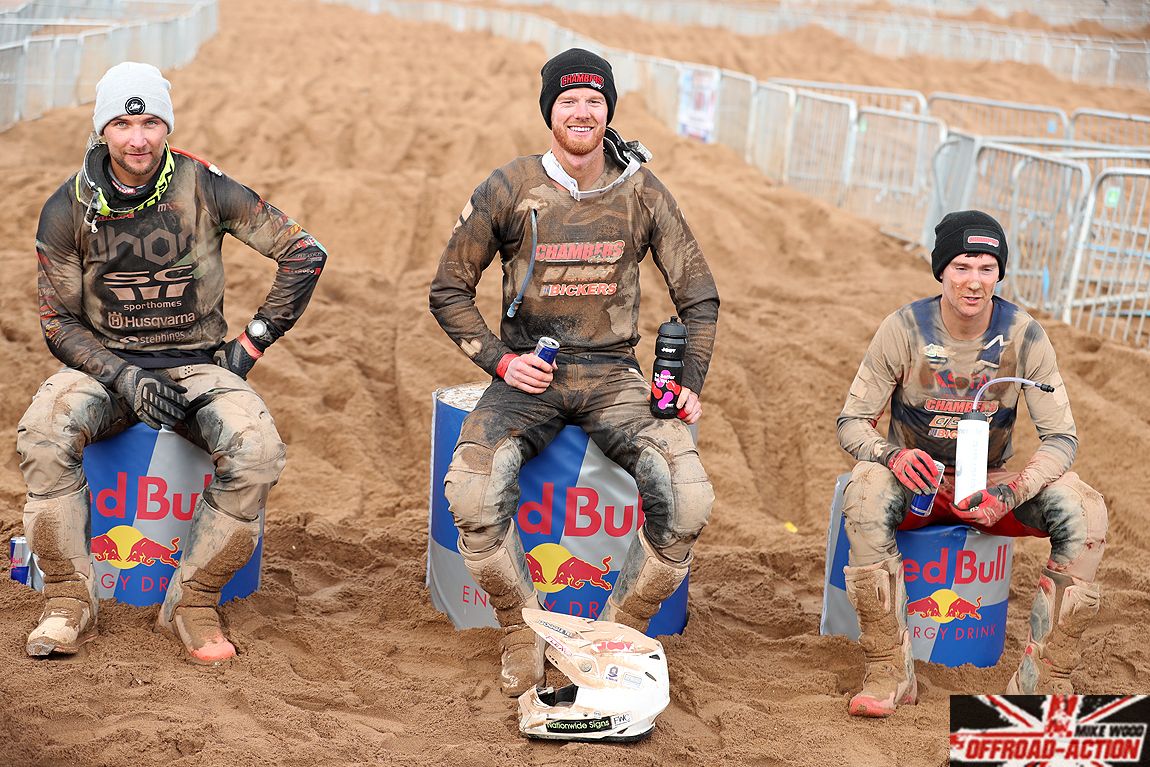 The 2022 AMCA Skegness Beach Race certainly proved to be productive for the Chambers Racing Team. Topping the podium was the very talented Dan Thornhill, not only bagging a third Skegness success but also recording his maiden win aboard his new Chambers Husqvarna machine. Backing Dan up, teammate Ben Franklin took 3rd whilst having a rare outing aboard a 450cc powered mount. Completing the main Skegness top three was none other than Evgeny Bobryshev, a former double ACU British Champion and GP rider. This was not only the Russian’s first race outing in 2022 but also rather incredibly throughout his entire distinguished career a first ever Beach Race outing!

Sponsored by Visit Lincs Coast, Sunday’s three hour contest is the main attraction of the weekend and once again a massive crowd lined every available vantage point to watch the action unfold. The big race was expected to have been a serious head to head battle for honours between Thornhill and Todd Kellett  with both riders sitting already on a brace of Skegness victories apiece. However Kellett was a surprising late withdrawal from the event so the spotlight was firmly on Gloucestershire based Thornhill as he went for the treble. In the race for honours, the question on everyone’s lips now was who would provide the challenge.

Well step forward Evgeny Bobryshev, and after accepting the kind offer from the AMCA and be able to enter Skegness, he intended to take his unexpected opportunity to get back to racing to the maximum! Very fast off the start, he was right on the gas, quickly hitting the front as Jamie Wainwright, Jack Beniston, Scott Aldridge, Sion Talbot and George Simmutch gave chase. For defending Skegness Champion Thornhill though, the early exchanges proved rather problematic, struggling to find a rhythm and crashing on more than one occasion! Showing his class though, Dan than put it all together and by lap ten he had not only moved up from 7th but also reeled in and passed leader Bobryshev.

From here though and for the next five laps the action was to be very fast and furious as Thornhill and Bobryshev passed and repassed each other for fun in an absolute classic. With pit stops now coming into play, Thornhill’s team were right on the money and very quick to get their rider back out on track. Having not competed or trained this year, Bobryshev was now naturally starting to fade in the tough, gruelling going whilst Thornhill was still right on the gas and putting the hammer down before racing onto another Skegness £1000 winners cheque. On completion, the classy Chambers Husqvarna rider had managed one full lap more than his very gallant challenger Bobryshev who was expressing a mixture of exhaustion, delight and frustration when interviewed afterwards!

After starting strongly, Wainwright was to disappear from proceedings on lap 14 when suffering from battery issues on his KTM. With Wainwright out, Ben Franklin making his Skegness debut rode a very well calculated race , moving up to pass Beniston on lap 33 as Talbot, Simmutch, Brad Thornhill, Aldridge, Sam Hughes and Alfie Calvert completed the top ten. In the incorporated classes built into the main event, Alex Buchanan was the first Clubman home whilst Derry Milling was top Veteran rider. Both Buchanan and Milling also finished inside the overall top fifteen.

The weekend had started with the East Lindsey District Council, Magna Vitae and SECWHA supported Clubman Solo Sprint which was of a 1.5 hour duration. Taking the win in that one was a member of a family synonymous with earning titles and racing at the very top level of Enduros, so well done Jack Edmondson. Initially though it was defending Skegness Champion Jack Beniston who was quickest away, producing a simply electric few opening laps as Edmondson, Jack Rowland, Sean Wainwright, Jack Naylor and Scott Aldridge gave chase. For twelve frantic and very entertaining laps, Beniston was in control until Edmondson eventually charged though. As Edmondson got in the groove and thus race onto victory, Beniston took 2nd despite having issues with his goggles steaming up. Third place went to Travis Steels who had been right down in 21st early on whilst Aldridge, Brad Thornhill and Aaron Patstone were next up. Completing sixteen laps, Alex Owen was to be the top Veterans finisher with David Dunn in 2nd and one full lap in arrears.

Saturday’s second action was the Tysers Insurance supported Quads and Sidecars battle. With Sheldon Seal the 2021 winner of the Quads not having entered this time around, it was Oliver Sansom who was quickest away in the battle for 2022 honours. On the gas, Sansom led Lestyn Rowlands, Jonny Kelly the 2021 runner-up, Jonathan McKnight and Kevin Meenagh. At the front Sansom was simply flying and looking very comfortable out front, quickly reeling off the laps until disaster struck as he ground to a halt on lap 15. That meant that Rowlands was now the leader and after overcoming an early issue with his prescription glasses steaming up he remained in control all the way to the chequered flag. On completion, Rowlands was one lap clear of Kelly as Laurence Stopps impressively moved up to slot into 3rd ahead of Jack Holmes, Marco Zaffino and Tom Cannell. This contest also catered for riders on the bigger 4x4 Quads with Harry Stevens just defeating Graham Guy who had both completed 21 laps, results which also placed them inside the overall Quads top ten.

Talking of the number ten, that’s the win count that Skegness sidecar serial winners Alun Davies/James Ferguson were chasing this time around. The 2022 contest though did not go to plan for them, forced out after eight laps completed. So step forward Daniel Lawry/Sam Wilkinson who after finishing as runner-up in 2021 went one better this time and thus earn a well-deserved victory. Lawry expertly steered his outfit through the soft, Skegness sand to complete 19 tough laps in the two hour time duration. That total was a couple more than this year’s silver medalists Sam Watson/Jak Watson with third place finishers Richard Chandler/Liz Millet a further four laps in arrears.

So with another great Skegness Beach bash completed,organisers AMCA Events would like to say a massive thank-you to the local authorities, sponsors, hospitality outlets, officials, work parties, competitors and supporters who made it all possible!.