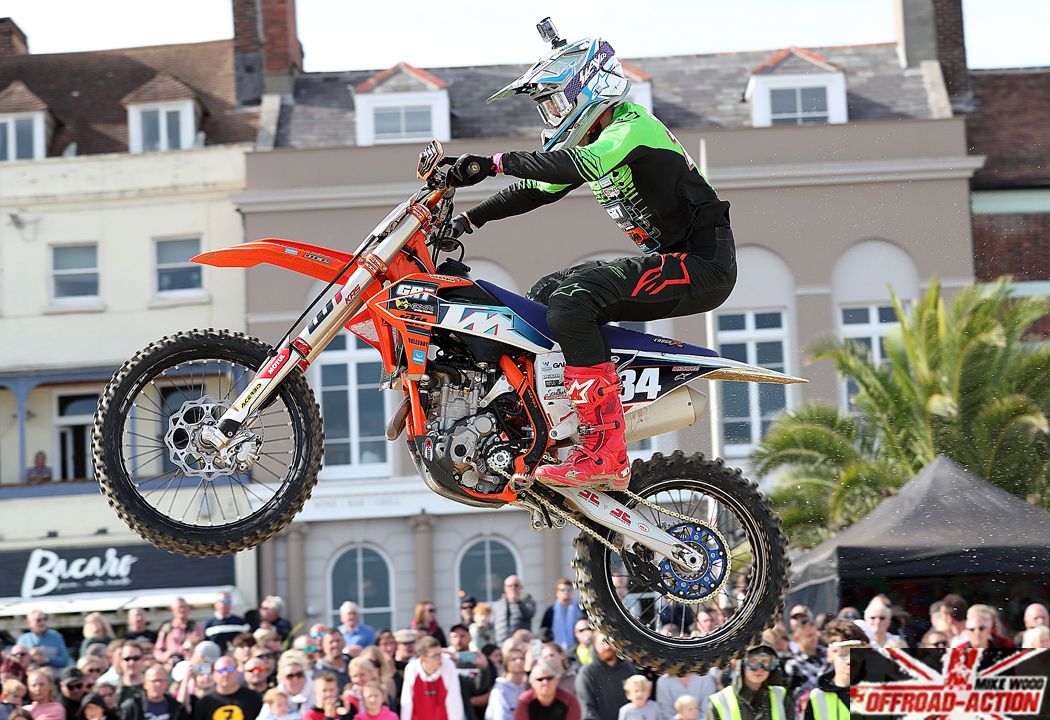 Following a long hard season racing, surely there can be no better way to wrap it all up than by being able to take your bike down to the beach for a sandblast and play! Well, that’s just what the Purbeck MXC  were offering as in conjunction with the Portland and Weymouth Lions Club they staged the 2022 AMCA Beach Motocross event on Sunday.

Despite being down to just six members, you would struggle to find a more enthusiastic Club than this bunch of guys at Purbeck MXC, they just love being actively involved in the promotion of this event and put a major emphasis on riders just having fun on their bikes, and that’s surely the right approach! With the help and support of an equally willing and enthusiastic band of helpers, this year’s event was to be another classic as big entries produced great racing, entertaining a very large crowd watching the action for FREE!

So the scene was set and the weather was playing ball as legendary Mr Starter at Weymouth, Jim Shipton ,dropped his flag to signal riders kicking  their dead engines into life, and beginning the race for 2022 Beach motocross  glory . Although being on the initial Weymouth entry list, last year’s Experts winner Todd Kellett was unfortunately a non-starter on Sunday but who would take his crown? Well, step forward the superb Jamie Carpenter who wrapped up what has been a memorable season for him by bagging a stylish brace of moto wins and overall victory at Weymouth.

Aboard his GRT Impact KTM, Carpenter the ACU Revo MX2 British Championship runner-up and MX Nationals MX2 Champion was quickest away in moto one, leading the charge as Corey Hockey, Henry Siddiqui, Scott Elderfield, Ben Harrison, Tommy Alba, Harry Linton and Bradley Wheeler gave chase. Meanwhile not having such a good start to the event was ACU Championship rider Charlie Putman as his Husqvarna machine initially refused to fire into life at the first time of asking. Charlie though did quickly eventually gain power and remarkably by the end of lap one had already recovered back up to 9th. Early on there was also to be further drama when Elderfield and Alba had a coming together which lost them time and places. At the front, it was the stylish Carpenter all the way from Siddiqui and Alba who having competed all season on a 250 2T KTM has now recently purchased a big 4T Husqvarna to contest the upcoming big Beach races. Having initially being left at the start, Putman was to endure a rather roller coaster of a ride, charging back to take a great 4th and on lap nine was even holding 2nd before a mistake dropped him back again! Hockey, a 2022 Acerbis Amatuer Nationals Champion and  another rider who after a season on  250cc 2T machinery was now campaigning a meaty 450F got home in 5th with the talented young Aaron Patstone celebrating his 20th birthday earning 6th.

What a contest the second Experts moto proved to be as Hockey made a glorious start to lead the charge with Carpenter outside the top six early on. The classy Carpenter was though having none of it and was soon moving up and along with Siddiqui and Putman were quickly inserting heavy pressure on leader Hockey. Despite this determined trio of challengers on his tail, Midwest Husqvarna pilot Hockey was though showing great maturity and a cool head on his big 4T machine before eventually being overhauled. Lap four and Carpenter was through before racing onto the win but behind him it was still all going on! The all-action, Fathead Racing Alba got up to 2nd before crashing and going back to 4th, whilst in the process setting the fastest lap time of the moto. Putman was also to crash in what was a hotly disputed clash which thrilled the crowd. However on completion behind Carpenter the victor it was Alba eventually recovering to take a hard earned  2nd ahead of Putman, Hockey, Siddiqui and Sam Winterburn.

First out on the sand at Weymouth were the Juniors and for two competitors this year’s event should remain forever in their memories as Jamie Halpin proposed to his girlfriend Gemma Holtham on the Beach after arriving on Friday, many congratulations to you both! In the Juniors racing, Jamie finished 44th overall whilst Gemma was 58th but there’s also a great story involving the eventual overall winner Finly Abbott! At just 16 years of age, this was his first ever Beach race and, what a fantastic performance the Ringwood SSC rider was to produce, looking  cool, calm and very composed!

In the opening Juniors moto, Finly was first to react to the dead engine start, leading the pack down the fast, full throttle straight, around the opening turn and through the series of jumps, twists and turns. Chasing Finly were Guy Turton, Kai Bradbury, Benjamin Grey, Joe Sullivan and Andy Salt. On lap two, Turton slipped down the leaderboard dropping to an eventual 11th place. Moving in the opposite direction was Syd Putman who got right up to 2nd spot. At the front, Abbott was still in charge but Putman was closing hard and on lap six he eventually took top spot. Syd’s joy though was to be shortlived when a mistake on the final circuit dropped him back to 4th. So it was to be a great victory for Weymouth debutant Abbott as Marcus Booker who had gated right down in 19th then stormed back to claim 2nd from Scott Sloane who went from 31st up to an incredible 3rd.

After his late slip in the opening Juniors clash, Putman made no mistake in moto two, leading all the way with Booker in 2nd after he had passed Matthew Hardwick and Danny Miller early on. Following his super win in moto one, Abbott gated 9th in the second clash, gradually climbing up the leaderboard to eventually get home in 3rd, enough to give him a richly deserved overall success. With a massive Juniors entry at Weymouth, finding a clear line and avoiding trouble to remain in contention is always a challenge, so well done to Scott Sloane, Oli Wickers, Kieron Meek, Adrian Saunders, Kai Bradbury and Benjamin Grey for putting together a brace of high points scoring rides.

Both Ed Mountjoy and Morgan Deakin took turns to briefly lead the opening  Seniors moto at Weymouth before Daniel Hartley took control. From here onwards it was Hartley all the way as Mountjoy took 2nd ahead of Deakin, Ben Sullivan, Barney Thurgood and Damien Saunders who had come all the way up from 22nd.

Leon Reed was fastest away in the second Seniors moto but that man Hartley was pure class, hitting the front on lap one before racing onto another win. After gating initially outside the top six, Deakin and Thurgood were to take 2nd and 3rd respectively as Joshua Kirby on a Phil Mercer machine scored an impressive 4th with Niles Reid, Saunders, Anthony Cotty, Marcus Clare and Jack Alderton next up. In this one, Saunders in getting that 6th place certainly produced the ride of the moto after being right down in 30th early on.

Great stuff and a memorable conclusion to another super Weymouth event. With the Purbeck MXC handing over a £1,500 cheque to the Weymouth and Portland Lions Club for local Charities and trophies handed out to the top ten in each classes, all that remained was the announce of the date for the 2023 bash. It’s going to be Sunday, 15th October so make sure you are there!