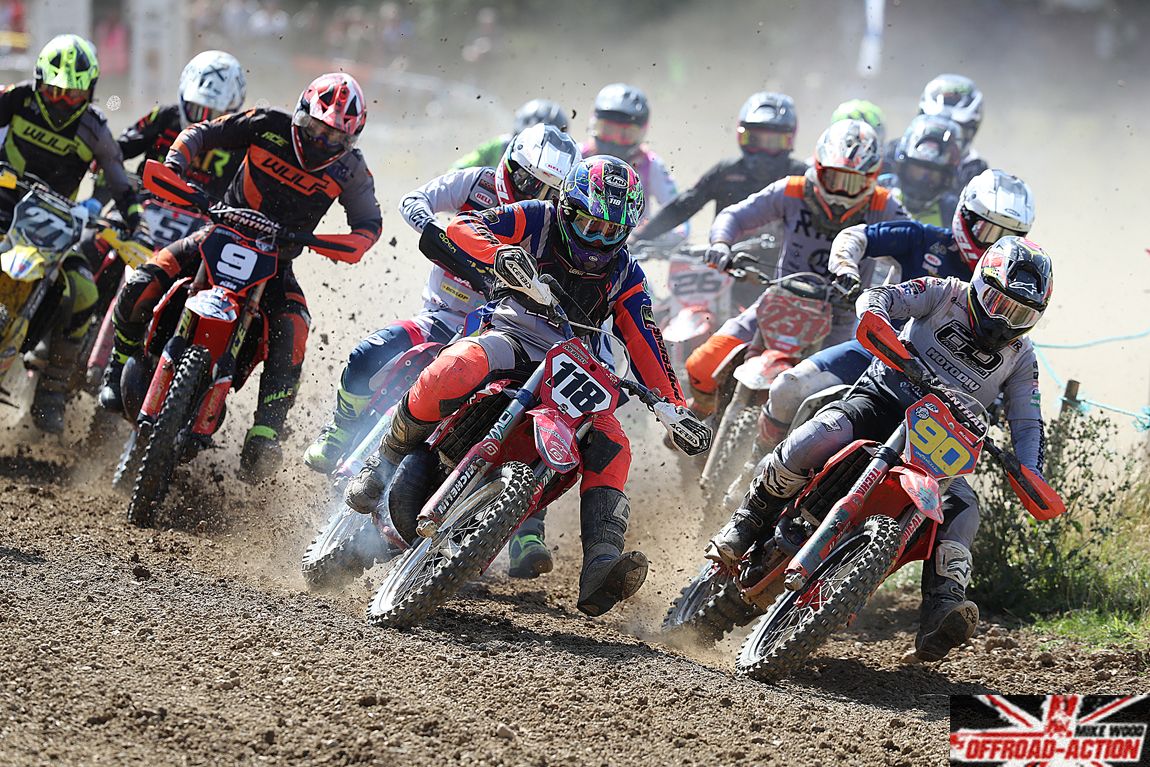 So this is it then, after six dramatic and exciting rounds the 2022 AMCA British Motocross Championship reaches its conclusion this weekend, Sunday,4th. September at Nympsfield in Gloucestershire. With 8 out of 10 titles mathematically still up for grabs, it should be a thriller so get along to the hillside venue. The circuit can be found on the unclassified road between Nympsfield village and Nailsworth, just look out for the big wind turbine and you have found your destination.

Let’s start with the battle for MX1 honours which as developed into a tense, high quality three way fight between Luke Burton, Josh Waterman and James Dodd. Going into the decider, Burton is just a single point clear at the top with Waterman 2nd and Dodd a further 5 points in arrears. Burton though is certainly the man in form, winning 12 out of the last 13 motos but it will be a major surprise if this contest does not go right down to the wire and the final lap of the season! Despite riding with an injured hand that requires surgery, 4th placed Adam Wells is next up and on course to record his highest MX1 finish whilst Sion Talbot holds 5th and Mark Roberts 6th. In the MX1 Cup contest, Talbot is well  clear  and has already sealed the title.

Despite riding with broken ribs and vertebrae during the last two rounds, defending MX2  Champion Shane Carless is on course to retain his crown but still has a little to do and get it over the line! So far Shane  has won 8 motos but his Championship lead as been cut down to just 20 points. On his tail is a real determined, all-action racer in the form of Tommy Alba. Riding a 2013 250c. 2T KTM, Alba has been right on it and you know that he will be giving it his all at Nympsfield! Unfortunately after  suffering a broken leg during round 6, the current 3rd placed rider Henry Williams  will miss the final round. That means that Rory Jones looks all set to take a medal position, just reward for a rider who has been hugely impressive all season. With Brookthorpe winner Corey Hockey a non-starter  this weekend  and Jake Preston another injury victim, the likes of Harry Linton, Brooklyn Evans, Lee Truman and Zac Stealey will  be looking  to move on up the standings. In the separately scored MX2, Cory McShane has already wrapped up the top Championship honours.

Although Kristian Whatley took top honours at the first two 125cc rounds, from there onwards this contest as been a Matt Bayliss motocross masterclass. Whether he makes the gate or misses it, fast Matt always seems to have the speed and determination to come through for the win! Indeed since round three he has recorded 14 out of a possible 15 moto victories, his only blip coming during race three at Brookthorpe when he ran out of fuel whilst leading! Keeping his own title hopes alive, Luke Dean took full advantage of Matt’s DNF to bag the win, a result which now leaves him 32 points in arrears of top slot whilst the equally consistent Chris Povey sits in 3rd spot, 70 points clear of Jordan Wright. Next up in what has been a very exciting 125cc campaign, youngster Joel Fisher is 5th ahead of Liam Gale, Matt Ridgway who has also scored some big points during the last two rounds to earn top five finishes, Cameron Jackson, Yarin Evans and Wesley McGavin.  In the separately scored 125cc Youth Championship, Fisher leads the way 31 points clear of McGavin with Evans a further 6 in arrears so this one is going to be tight!

Just like MX1, the Vets title race as developed into a super three rider tussle for the crown. Going into Nympsfield, just 7 points separate leader  Gary Davies, Shane Holmes and defending Champion Phil Mercer. On the motocross win count it’s  Davies on 9, 250F Honda rider Holmes on 6 and Mercer 8 so that suggests that this one is going right down to the wire! Next up in the Vets comes James Lane, Simon Lane, Matt Chaplin, Brian Staples and Richard Tudor. Despite being a little battered and bruised following Brookthorpe crashes, Mercer also leads the Vets Over  50’s and is 136 points clear  of Staples with Alan Reese in 3rd.

Three riders can also mathematically bag the Youth 85cc title. At present, Jack Evans is top of the table on 1256 point’s with Sebby Moore 1245 and Will Turner 1222 next up and ready to give it their all in the race for honours. This season as been dominated on the motocross win count by Oliver Bubb but he’s not competing at Nympsfield due to other commitments so the focus is firmly on Evans, Moore and Turner. Other riders to look out for in this finale are Oakley Kettle, Wyatt McGregor, Oliver Bebb, Harley Piper and George Bromley. Going into this decider, Bebb and Piper are also hotly disputing top spot in the SW85cc contest and are currently separated by just 26 points.