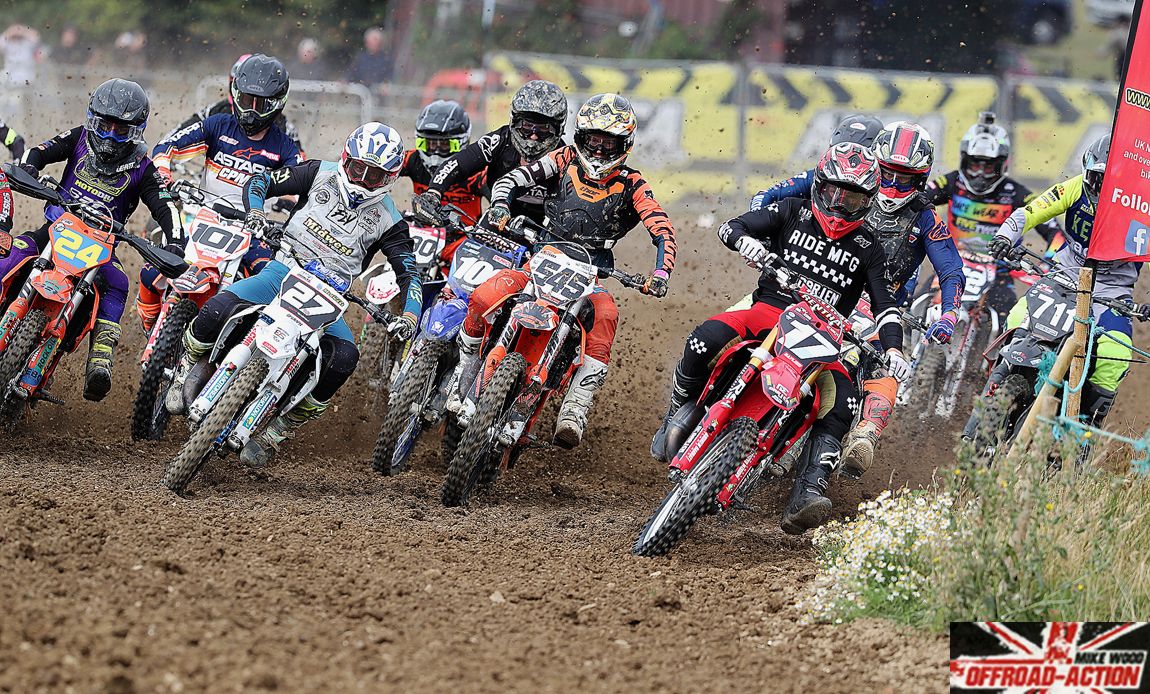 With the intended choice of Foxhill becoming unavailable due to unforeseen circumstances, it left the AMCA frantically searching for a new venue to host the penultimate round of their 2022 British Motocross Championship sponsored by Dunlop. Thankfully the Cheltenham Spa MXC then stepped forward, kindly offering the use of their Brookthorpe circuit and despite the very short notice, what a fantastic event they promoted. On both days of action and despite the recent extreme heat, track conditions were absolutely spot on and in recognition of their efforts, the riders present then responded by producing a weekend of top class racing.

Opening up proceedings was the always exciting 125cc class and entering this penultimate round, series leader Matt Bayliss was boasting a very nice 68 point advantage at the top. However although Matt was to go onto win 4 of the 5 Brookthorpe moto’s, his Championship advantage as now been cut in half and is only 32 points! The reason for that reduction was due to a rather embarrassing moto three incident when he ran out of  fuel on the final lap  when holding a big lead! Although Matt did return to the pits, refuel and still finish the contest in a distant last place, he was disqualified from the results! In that race, Luke Dean was to bag the win and with another title rival Chris Povey going missing early on due to mechanical issues it was Jordan Wright, Matt Ridgway, Joel Fisher, Yarin Evans and Wesley McGavin who filled the top six.

Despite that hiccup for both Bayliss and Povey, they were still to be major players in the remaining clashes along with the excellent Dean, Ridgway and Wright. Indeed throughout the weekend, both Povey and Ridgway also enjoyed bagging a cheeky holeshot or two to help them along the way and earn eventual podium placings. So with five places to be filled on that coveted box it was FiveTwo Racing Fantic pilot Dean who despite being unhappy with his starts still raced hard for his points and took top step. Dean was to be joined by Wright who has been a revelation since jumping aboard the LRT Yamaha, Ridgway, Bayliss and Povey. With one round of this super series to go, Bayliss sits top on 1075 with Dean on 1043 and the only other rider who can mathematically clinch the title. Despite suffering a moto one DNF due to a broken throttle, Fisher still tops the 125cc Youth Championship on 1023 points with Evans next up on 986 and Wesley McGavin in 3rd on 892.

What a memorable weekend it was to be for MX2 Midwest Racing Husqvarna pilot Corey Hockey. Winning his first ever AMCA Championship moto in the opening contest, Corey appeared to certainly enjoy the sweet taste of success! Victorious in another two races and backing it up with a brace of runners-up spots, that was enough to also earn him a richly deserved maiden AMCA Championship overall success, well done Corey. The only other MX2 moto winner at Brookthorpe was the fast and very exciting Tommy Alba on that 2013 250cc 2T KTM, enough to earn him 2nd overall ahead of the reigning Champion Shane Carless. For Carless, this round six was to be another serious test of his resolve and determination, still suffering from immense pain after a big crash during the previous round three weeks earlier at Lower Drayton when he broke four ribs and three vertebrae!  However typical of the Champion’s character, he dug very deep to go 6/5/3/3/3 and earn 3rd overall, a great result. Right in the mix and providing great entertainment with his spectacular style, Rory Jones took 4th overall with the very experienced Ray Rowson rolling back the year’s and taking 5th.

Whilst Rowson was clearly enjoying himself and even leading the last Brookthorpe moto early on, the weekend was to finish painfully for season-long Championship contender Henry Williams and top six runner Jake Preston. Involved in a big collision on turn one of the last moto, Henry suffered a suspected broken leg whilst Jake had a suspected broken elbow, so here’s hoping these two lads have a speedy recovery!. So in the title stakes, Alba has cut leader Carless advantage down to a catchable 20 points with Williams, despite that last race crash still holding 3rd. However with Brookthorpe winner Hockey already announcing that he will not be at the final round due to other commitments, Jones now looks set to overhaul Williams in the race for the bronze medal slot. Over in the MX2 Cup competition, Cory McShane with another strong showing at Brookthorpe has already sealed top position ahead of Adam Cook.

Going into the Brookthorpe event, just 7 points separated Gary Davies, Shane Holmes and defending Champion Phil Mercer at the top of the Vets Championship table. Incredibly after another five frantic clashes, that gap is still exactly the same ensuring that the final round should be an absolute thriller! At round six, Mercer (2), Davies (2) and Holmes, despite his distinct power disadvantage by only riding on a Honda 250F took the moto wins. Indeed Holmes success in the opening race of day two was particularly special as he got past Davies then reeled in Mercer in super style,snatching the victory by the very narrowest of margins. Crucially though, Mercer took the last race win after passing both of his title rivals in determined style, a result  which was to give him the podium top slot after finishing the meeting level on 237 points with Davies. For Phil though the Brookthorpe action was far from straightforward, especially moto two on Saturday! Chasing Davies for the lead, Phil crashed hard on more than one occasion, openly admitting afterwards that the conclusion of race was just a blurr, ringing a few bells! Somehow despite suffering a heavy blow to his head, he still managed to pass Brian Staples and Matt Chaplin on final lap and earn a 4th place finish! With five podium places available, local residents Simon and James Lane enjoyed their Brookthorpe adventure to bag a well deserved 4th and 5th overall respectively. Although Mercer still has work to do in the main Vets class, he has done just about enough to earn the Over 50’s class title, currently 136 points clear of Staples with Alan Reese.

There was no doubting the Youth 85cc winner at Brookthorpe as the superb Ollie Bubb strolled to five big moto victories. However Bubb has ACU Championship duties as well in 2022 and having already missed one round, he has announced that he will also not be at the AMCA Finale in two weeks’ time. So that means the title will go to either Jack Evans, Sebby Moore or Will Turner who along with Oakley Kettle and Wyatt McGregor produced some great racing at Brookthorpe. Moore (2), Kettle, McGregor and Turner took the opportunity to chase the flying Bubb home in the process also indulging in their own all-action motocross battle.So the podium was Bubb, McGregor, Moore, Turner and Evans but in the title race, Evans is the pacesetter on 956 points from Moore 945 and Turner 922  Over in the SW85cc class, Oliver Bebb scored another overall win to move 26 points clear of Harley Piper at the top. This title is certainly going to one of these two tiny pilots.

Although MX1 maybe low in numbers, it’s certainly very high in quality with the top three of Luke Burton, James Dodd and Josh Waterman having produced an enthralling season-long battle in the race for the title. Incredibly going into the last round at Nympsfield, there is just 6 points separating those aces. Leading the way is Burton thanks to a simply stunning run of form which as seen him win 12 of the last 13 moto’s contested. Those results mean that Burton has turned a 20 point deficit into a single point advantage, replacing Waterman at the top whilst Dodd is just a further 5 points in arrears.

At Brookthorpe, Burton was simply immense, leading all five moto’s for pretty much the entire duration and only being briefly headed by Dodd in both the first and last clashes of the weekend. On Saturday, Dodd got the better of Waterman to earn 2nd place in all three moto’s before the roles were reversed on day two. Taking 4th overall in this class was Sion Talbot who enjoyed some great tussles with Adam Wells and Mark Roberts. Following his Brookthorpe showing, Talbot has also wrapped up the separately scored MX1 Cup.

So, it’s now onto the Finale at Nympsfield on Sunday, September 4th. With 8 out the 10 titles on offer still to be decided, It’s going to be a tense but very exciting day!