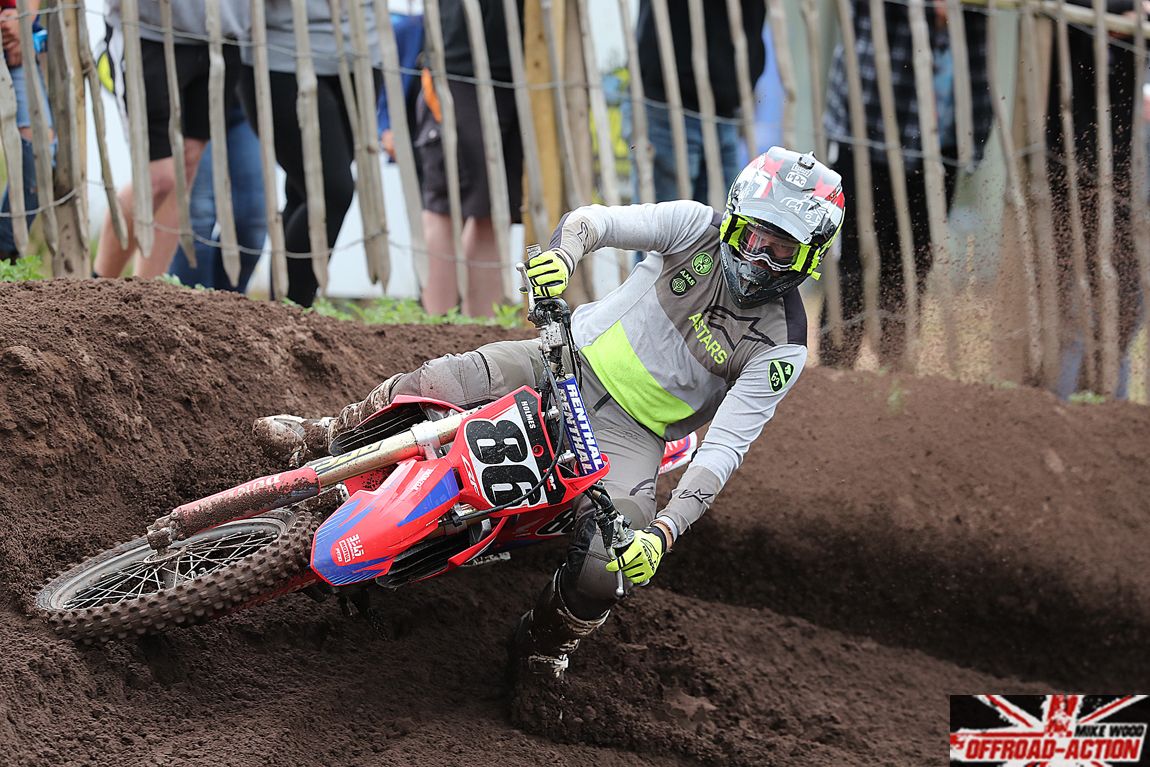 Last time out at Hawkstone Park, Josh Waterman extended his MX1 lead by producing three calculated rides to finish ahead of his current closest title challenger James Dodd. The gap at the top is now 13 points, whilst round four winner Luke Burton is a further 30 points in arrears and still very much in the hunt. Next up in MX1 is the defending Champion Ashley Greedy with Adam Wells, Mark Roberts, Jake Shipton, Josh Canton, Tony Craig and Sion Talbot completing the top ten. Eighth in the main series, Canton also leads the MX1 Cup standings with Talbot in hot pursuit. These two lads are well clear of the next best rider Sunny Thompson.

Although he didn’t quite make the Hawkstone podium, defending MX2 Champion Shane Carless still looks to be in a very good place as he attempts to retain the title. Shane did win a moto at round four along with Nev Bradshaw and Henry Williams and that means that the Welsh ace holds a nice 44 point lead at the top of the table. Currently holding 2nd is Tommy Alba from Williams, Rory Jones, Corey Hockey and Jake Preston. Last time out, Preston produced his best performance of the season so far, getting on the podium in 3rd overall. At Lower Drayton, he will certainly be hoping for a repeat showing in a class which is stacked with quality and a full start gate! Over in the MX2 Cup competition, just 31 points separate the current top four of Callum Baldwin, Josh Peters, Adam Cook and Cory McShane and it’s still all to play for!

Winning all three of the 125cc moto’s at Hawkstone in style, Matt Bayliss is now sitting 43 points clear of Luke Den in the title chase. Getting stronger as the season progresses, Chris Povey is up into 3rd in the standings with Joel Fisher, Jordan Wright, Liam Gale, Louis Vincent and Jordan Ridgway holding the next five positions. Having took overall victory at Culham and Brookthorpe, former ACU British Champion Kristian Whatley missed round three before returning at Hawkstone. At present the South Coast rider holds 9th but could still be a major player in the racing still to come! This class also incorporates a Youth 125cc Championship and despite dropping to 4th in the main table, young Fisher is the pacesetter as Vincent and Yarin Evans give chase.

It’s certainly looking very interesting at the top of the Vets title race as just 9 points separate the leading three positions. Bagging a great maximum score at Hawkstone, Gary Davies is now the new series pacesetter just a single point clear of Shane Holmes with defending Champion Phil Mercer in 3rd. Such as been the dominance of the leading trio that they already hold a 60 point advantage over 4th placed James Lane with Simon Lane, Sean Smith, Matt Chaplin, Alan Jones and Brian Staples next up. In the separately scored Vets Over 50 class its Mercer top of the pile from Smith and Staples.

Although Wildcard Freddie Gardiner was the Youth 85cc winner at Hawkstone, Ollie Bubb increased his series lead by chasing him home in all three clashes. Ollie, on the podium in every round, now tops the standings 65 points clear of Sebby Moore with Jack Evans, Will Turner, Oakley Kettle and Oliver Bebb next best. Bebb is having a great season and also the current leader of the Youth SW85cc class from Harley Piper and Lewis Day.

The Lower Drayton circuit can be found just off junction 13 of the M6 with the postcode being ST19 5RE. Admission costs are for the weekend Adults £15, OAP £10 or per day Adults £10, OAP £5 with Children Under 16 admitted for FREE if they are accompanied by a paying Adult.