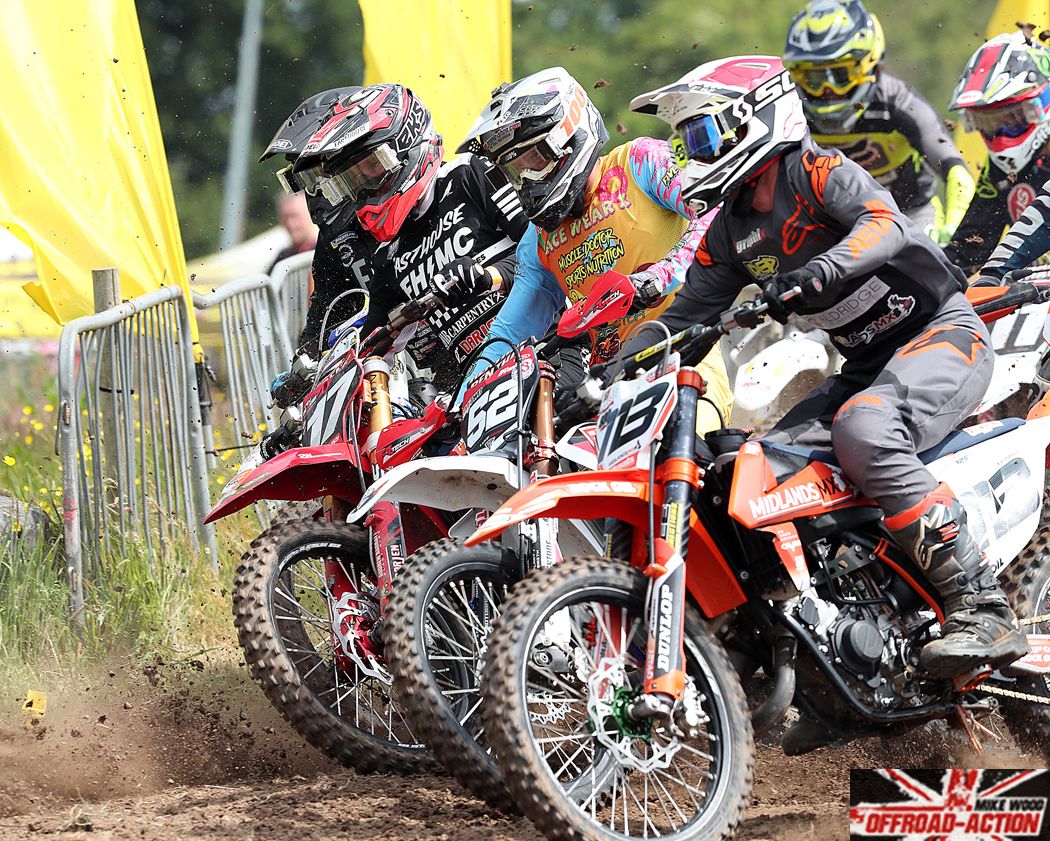 Following three planned double header rounds, the AMCA British Motocross Championship sponsored by Dunlop goes to the iconic Hawkstone Park circuit this Sunday. And, for this latest chapter of the series, it’s just a one  day affair so that means three hotly contested moto’s for all classes.

Last time out at Warmingham Lane in Cheshire, the MX1 title chasing leadership changed hands and it’s now Josh Waterman at the top of the pack. So far Josh has won three of the nine moto’s completed and never finished lower than 4th with the other race victors having been James Dodd, Jake Shipton and Luke Burton. Picking up his first ever AMCA overall success at Warmingham, Dodd sits just 5 points behind Waterman with Shipton a further 35 in arrears. At present, Shipton is a rider very much inform, winning the Pro class at the recent Bridgestone Masters event at Cusses Gorse and performing well during the Patchquick Trophy. His FUS Marsh Geartec Husqvarna teammate Burton was the early leader of this Championship but now though has some work to do after a last moto DNF at Warmingham when a subframe bolt came loose. With Burton 4th in the table, next up are Ashley Greedy, Adam Wells and Mark Roberts. Sitting in 8th is the current leader of the incorporated MX1 Cup competition, Josh Canton.

Defending AMCA MX2 Champion Shane Carless is the man topping this year’s title chase so far, 37 points clear of Tommy Alba. Super Shane has been victorious in five moto’s during the early exchanges of the 2022 series with Alba, Henry Williams and Nev Bradshaw the other race winners. The Championship standings so far show Williams in 3rd with Corey Hockey, Rory Jones, Jake Preston, Zac Stealey, Harry Linton, Jack Timms and Adam Cook next up. This class as already produced plenty of intriguing racing so far and with Bradshaw strongly rumoured to be entering Hawkstone, it’s sure to be equally as good this time around. In the MX2 Cup event, Callum Baldwin is the leader so far from Billy Duke, Cook and Josh Peters.

With the 125cc series pacesetter Kristian Whatley not starting last time out at Warmingham, it’s now Matt Bayliss leading the way 24 points clear of Luke Dean. At Warmingham, Dean was in terrific form, winning three out of five moto’s and bagging the overall top slot from Bayliss and Jordan Wright. This coming Sunday at Hawkstone, Wright will be making his Championship debut for the LRT Race team on a blue Yamaha having already campaigned both KTM and GasGas machines earlier in the series. At present Wright is 6th in the standings behind the very talented young Joel Fisher, Chris Povey and Danny Lanfear. Completing the top ten at present are Liam Gale, Louis Vincent, Jordan Ridgway and Kieron Cooke. In the 125cc Youth Championship which is also built into the main series, Fisher tops the chase ahead of Wesley McGavin and Vincent.

After suffering a nasty finger injury at Warmingham, Phil Mercer the defending AMCA Vets Champion has also lost his 2022 series lead. Although Phil is hoping to compete at Hawkstone, it could well be a case of damage limitation as he attempts to keep himself firmly in touch with Shane Holmes and Gary Davies, presently his two main rivals who are vying for honours at the top of the standings. Incredibly Holmes has competed on three different e machines already in 2022, a small 2T KTM at Culham, a big blue Yamaha four-banger at Brookthorpe and finally a red 250F Honda at Warmingham. On that Honda, Shane took three race wins and the overall verdict last time out and is now 14 points clear of both Mercer, who scored a very brave 3rd overall and Davies, still competing despite a painful knee injury. Next up in the Vets standings comes James Lane, Simon Lane, Sean Smith, Matt Chaplin and Brian Staples. In the Vets Over 50’s it’s Mercer from Smith, Staples and Stephen Sankey.

So far in the Youth 85cc competition, the superb Ollie Bubb holds a perfect 100% unbeaten record. Last time out though at Warmingham he suffered a big crash in practice resulting in a badly damaged bike which looked decidedly second-hand. Despite banging his shoulder and being visibly shaken by that incident, Ollie jumped aboard his spare machine and then proceeded to reel off five moto wins. On each occasion it was to be a combination of Sebby Moore, Jack Evans, the fast starting Oakley Kettle and Will Turner proving to be his closest challengers. At present, Evans also sits 2nd in the Championship standings 51 points behind Bubb with Moore just a further two points in arrears. Rounding off the top ten places in the table are Kettle, Turner, Harrison Davies, Oliver Bebb, Tallis Price, Harley Piper and Lewis Couzens. Bebb is also the current top rider on the 85cc Small-Wheeled bikes ahead of Piper and Lewis Day.