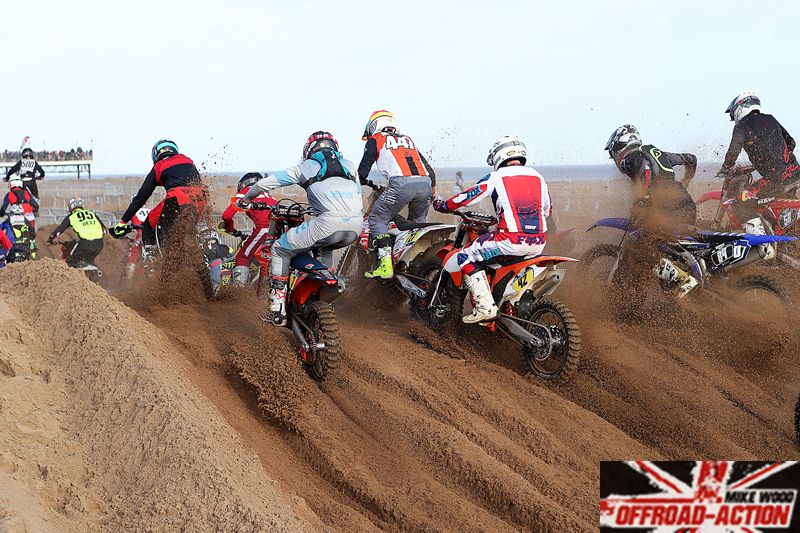 Even a massive overnight tidal surge which flooded parts of the circuit couldn’t halt the superb 2021 AMCA Skegness Beach Race. Following an enforced break due to the Covid pandemic, the event supported by Visit Lincs Coast BID, Magna Vitae Trust and East Lindsey District Council with sponsorship from Tysers Motorsport Insurance, Datatag Security and Dunlop Tyres was back in style. Attracting a very big entry and watched by one of the largest crowds seen so far in its 11 year history, the weekend culminated in Sunday’s big main race which resulted in a great win for Cabscreens Crescent Yamaha star Dan Thornhill.

As usual though the first race of the weekend was the Clubman Sprint contest which was of a 1.5 hour duration. And with the circuit having been constructed by Phil Roberts and not featuring a big opening sand dune to confront the riders, it meant that they could immediately engage full race mode right from the off. As the gates were opened and the pack roared towards turn, one there was to be immediate drama though as Brad Thornhill crashed spectacularly. Thankfully the pack managed to avoid Brad and he was quickly on his feet and starting to chase the pack.

At the front, Jack Beniston was already in control and on his way to another Skegness win as Scott Aldridge slotted into 2nd. Also off to a strong start and avoiding the early carnage in a packed field were Travis Steels, Sean Wainwright, Jack Rowland, Jack Naylor, Samuel Price, Dave Rushton and Lewis Meadows. Meanwhile after his spill, Thornhill was on a serious charge and after just 2 laps had already recovered back to 14th. Ten laps in and Brad was up into 3rd, a position he then held to the flag as Beniston who had led all the way scored a superb, smooth and untroubled victory from Aldridge in 2nd. There was also a Vets contest incorporated into the Clubman Sprint and taking top slot in that one was AMCA Vets Championship contender Sean Smith completing 16 laps as David Dunn took 2nd with Joseph Baston 3rd.

So with the action underway, it was now the turn of the Tysers Quads/Sidecar class to entertain and that’s just what they did! A superb entry of 85 Quads and 6 Sidecars started the event which was of a 2 hour duration and quickly developed into an epic contest. French Beach Race Championship contender Sheldon Seal was fastest away but right from the off, Oliver Sansom, Jamie Morgan, Kane Hall and Northern Ireland visitors Jonny Kelly and Kevin Meenagh were inserting heavy pressure on Seal. Indeed on lap three, both Sansom and Morgan passed Seal with Meenagh and Hall then briefly flirting with a top three placing.

Seal though was displaying superb determination and resilience and refused to be pushed back, regaining his race leadership on lap four. Unfortunately as the contest then unfolded, early contenders Hall, Sansom and Morgan were all to be forced out of proceedings with mechanical issues on laps 15,12 and 7 respectively thus giving the leader some relief and breathing space. From here onwards, Seal controlled the contest in style to take the win  one lap ahead of Kelly making his third Skegness appearance as Meenagh completed the podium. With James Bevan getting home in 4th, next up was Simon David on a 4x4 Quad machine. This was the first year that the Skegness event featured a separately scored class for the big 4x4’s and naturally David was elated with his fine victory. Completing a total of 20 laps, Harry Hinkley finished on the same total with Harry Stevens, Wayne O’Brien and Danny Gilligan next up.

Only entering the event at the very last minute, Sidecar aces Alun Davies/James Ferguson were at Skegness hunting for another win and that’s just what they achieved! This was to incredibly be the Welsh crews 9th Skeggy victory, what a simply tremendous achievement! Enduro ace Davies certainly gets his race strategy spot on and after starting in 43rd spot he gradually picked off his rivals. He not only won the Sidecar class but finished 13th overall in the race itself, in the process defeating plenty of the Quad mounted riders.After finishing runner-up in 2019, Daniel Lawry/ Sam Wilkinson had to settle for silver again in the Sidecar class, 2 laps behind Davies. Completing the podium was David Petty/Neal Burke on a ten lap total.

So with day one done, the scene was set for the big Visit Lincs Coast BID main 3 hour sand event only for that afore mentioned tidal surge to throw a major spanner into the works. Overnight a strong wind had whipped up a raging North sea causing it to storm up the Skegness beach thus leaving parts of the circuit flooded. This was a freak occurrence which had previously never affected the event. Undeterred though, track curator Phil Roberts and his crew along with the AMCA Events team rolled up their sleeves, manned the machines and got to work repairing the damage. Digging trenches and gulley’s the water was eventually routed back to the sea but the going was now naturally extremely heavy in some patches. Most importantly though the race had been saved although the intended start time had been pushed back and the duration of the contest cut to 2.5 hours.

With a massive crowd in attendance, Todd Kellett was looking to make it a Skegness win treble but there was plenty of quality opposition to overcome if that hope was to be achieved. And right from the off there was to be major drama on the opening lap as Kellett struck trouble. On the far side of the circuit and out of view from most of the spectators, Todd had hit one of those very spongy, waterlogged patches and sunk. Although eventually regaining forward momentum, he was already well off the leaderboard and faced with a momentous recovery ride! Also in trouble was 2019 Weston winner Ashley Greedy who’s waterlogged Kawasaki ground to a halt and refused to restart. After making the long journey to Skegness from his home in Wales, Ashley’s race was over before even completing a single lap, what a nightmare!

As the pack completed that naturally frantic opening lap it was Cabscreens Crescent Yamaha rider Dan Thornhill leading from youngster Sam Nunn, Sean Wainwright, Bailey Johnston, Travis Steels and Jake Edey, having his first ride since 2019. As the very stylish Thornhill started to stamp his authority on proceedings, only briefly losing his top slot to Nunn when making a pitstop, Kellett broke into the top thirty placings on lap five and was now on a serious charge. Continuing his recovery, Todd got up to 16th before his challenge was then halted on lap ten due to mechanical gremlins.

Back out on track, after finishing runner-up in Saturday’s Clubman Sprint, Scott Aldridge was right on the gas again in this one getting up to 3rd before before being replaced by Nev Bradshaw. Having his first ever ride on a very tasty and trick looking Suzuki prepared by the guys at SR75, Nev was flying and in the groove eventually getting right up to 2nd with Sion Talbot slotting into the top three. Already scoring 10th in this year’s Weston event, Welsh rider Talbot was initially outside the top 30 but then gained plenty of momentum as he surged up the leaderboard. Also having a good ride was Brad Thornhill who like Talbot was not showing on the early leaderboard positions.

Beach racing though can be a lottery and in what was now a brutal Skegness contest which was reaching its conclusion, there was to be some significant changes in the leading positions. Nunn who had held a great 2nd place for the majority of the race dropped down to 6th before disappearing on lap 29 whilst the unlucky Brad Thornhill went out with less than 5 minutes remaining and when holding 4th. Moving into that vacant position though was Skegness regular Ryan Crowder. Having had a strong season competing in Enduro action, Ryan probably enjoyed the tough going in recording his best Beach race result so far!

So with time up and a full lap clear of his rivals, Dan Thornhill cruised over the finishing line to bag a richly deserved second Skegness win after being previously successful back in 2014.Typical of the great respect which exists between the Thornhill brothers, Brad was first out to congratulate Dan, a truly nice and very sporting gesture. Taking 2nd spot on completion was Bradshaw from Talbot as Edey, Johnston, Wainwright, Henry Partridge and Travis Steels also finished inside the top ten.

Having his first ever Skegness ride, Phil ‘Factory’ Mercer used all of his vast quality and experience to take top honours in the separately scored Vets contest. Despite now being 50 years of age, Phil even finished 15th in the main overall classification. In this class, Sean Smith the Saturday winner picked up yet another award with a bronze medal placing behind Derry Milling. Also separately scored was the Clubman class as Callum Murfitt completed 30 laps for the win, 4 clear of  runner-up Tommy Clark and Harvey Cashmore.

Well done to everyone at AMCA Events for getting the event completed in style. The questions now remain, will Dan Thornhill be back to make it a hat-trick and will the incredible Davies/Ferguson be looking to score their 10th Skegness win in 2022. The best way to find out is make sure you are there for another fantastic Beach Race weekend at the popular Lincolnshire seaside venue.