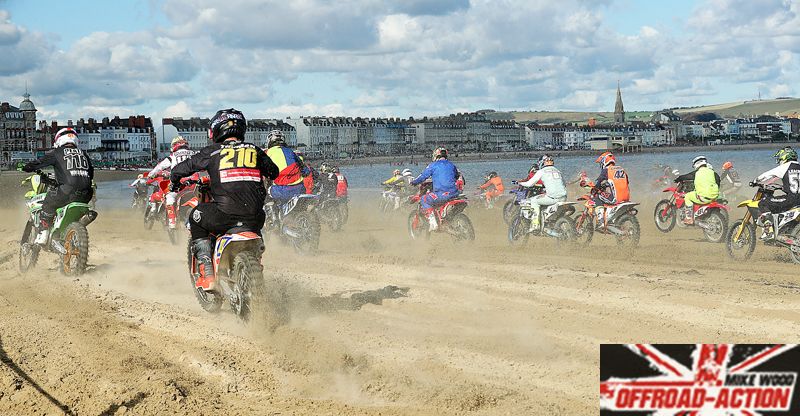 The AMCA Weymouth Beach moto-cross was back for 2021 and what a simply superb event it was! With a massive crown in attendance and able to watch the action for FREE, nearly 300 riders then entertained them with an afternoon of sand surfing. Hosted by the Purbeck MCC in conjunction with the Weymouth and Portland Lions Club and aided by their reliable army of volunteers, this latest staging was to be another classic, immaculately presented with it’s usual precision and class.

After six hotly contested races, the end result was to be overall victories for Todd Kellett (Experts), Alfie Calvert (Seniors) and Ajay Litt (Juniors). Whilst Kellett’s success was rather straight forward and expected, youngsters Calvert and Litt certainly had to work a bit harder for their ultimate wins!

So, after a delayed practice due to a slower than expected retreating tide, it was eventually time for the racing to start. First up was the full Juniors Unlimited class and as Purbeck’s very own Jim Shipton dropped the flag, the rush was on to fire the dead engines into life and stretch the throttle wire to the absolute max in the long blast down the beach to turn one. Quickest away was Danny Morris with Harry Burton, the very experienced Leonard Paget, Tommy Hobday, Ricky Hayles, Sam Wilson and Ajay Litt giving chase. By lap two, Paget had moved into pole position but his joy was to only last for one further circuit of the Weymouth Beach as Litt now controlled proceedings. Looking a very likely winner, Litt though was passed on the final lap of the contest by Thomas Sharpe on the 150cc KTM who had initially gated in 11th. With Litt getting home in 2nd, Hayles, Wilson, Paget and Hobday completed the top six.

In moto two, Mark Morris, Wilson and finally Litt enjoyed the glory of race leadership. With Litt taking the win, the ride of the moto was produced by Ben Boare. Starting down in 25th, he got right up to 4th following seven hot, highly contested laps. Those Junior results meant that Litt was to be the 2021 Weymouth victor, a truly fantastic result bearing in mind that he is not a regular competitor, this being his first race of the season and first ever win! Joining him in the top three was Sharpe and Wilson.

Jack Hooper led the pack away in the Seniors Unlimited moto one with young Weymouth debutant Alfie Calvert on his tail ahead of Bradley Frost, Luke Scott, Ashley Locke and Lewis Scard. That leading pack was to be then joined by Harvey Cashmore in what was developing into a super scrap. Calvert took over the race leadership for two laps before Cashmore who had started 8th then blasted to the front. On lap seven, Calvert in very determined mood responded in style by fighting back again and thus retake the advantage before keeping his composure to thus bag  the win. With Cashmore in 2nd, Charlie Nightingale, Ryan Tanner, Frost and Jack Hooper completed the top six.

After Hooper then led the pack down the beach and into turn one of the second Seniors clash, both Tanner and Calvert  found a way through before locking horns in a serious head to head battle for glory. Swapping positions at the front, Calvert appeared set to make it a moto win double only to then fall on lap seven and be trapped under his machine. Quickly though, Calvert was able to remount and regain forward momentum, still having enough time to maintain 2nd spot. In another late twist though, Tanner then went out of the contest on the penultimate lap and the new race leader was Ashley Locke who had initially started in 7th. From here onwards he remained in control, and after being forced out of the opener on lap one, he brilliantly steered his tiny 125cc Husqvarna to victory, taking the chequered flag from Calvert, Cashmore, Nightingale, Frost and Vincent Branch. The overall top three saw a deserved success for teenager Calvert in what was his Weymouth debut after being too young to compete the last time the event was held back in 2019. Another teenager Cashmore finished 2nd overall with Nightingale 3rd.

Fresh from his fourth Weston Beach race title and getting some last minute practice in before the opening round of the French Beach Race Series this coming weekend, Todd Kellett was in a very buoyant mood at Weymouth and what a start he made in the opening Experts Unlimited race. With an incredible display of smooth, very fast but totally controlled sand racing, the Drag ‘On Tek Yamaha rider lapped the entire field in winning moto one. Taking second spot was the very loyal Weymouth regular James Dodd who had enjoyed a great ride himself with Brad Thornhill, brother of ACU British Championship star Dan in a super 3rd. Out on his new 250cc 2T KTM, AMCA Championship front runner Josh Coleman got home in 4th as Henry Siddiqui, Charlie Putman, Aaron Patstone, Mark Young and Lee Truman were next up.

Making a simply supersonic start, Ultimate Wheels/Thunderroad Honda star Dodd made a fantastic getaway in moto two, leading the contest for a couple of laps with Kellett quickly moving into 2nd spot. Eventually though the dynamic Todd  got through and despite a serious issue with his goggle roll-on’s sticking and forming a trail, clear vision was never going to be a problem as he stormed to another win. In this one Doddy was also right on it and along with Kellett completed 15 laps, one circuit more than the rest of the field. Taking 3rd was Scott Elderfield from Putman, Simon Booth, Truman, Young and Siddiqui. After their super opening rides, Thornhill and Coleman suffered mixed fortunes in this second clash. Brad was going well early on in 5th before falling and going right back to 49th. Undeterred though the Gloucestershire rider dug deep to come right back to 17th and 8th overall whilst Coleman went out on lap two. Special mention in this Experts class goes to Luke Newman who campaigned a 150cc Husqvarna and brought it home in 11th overall, a super result! Indeed throughout the day there had been plenty of other very impressive results recorded by riders on small capacity 2T mounts!

So that’s it for 2021 and with the Purbeck MCC handing over a cheque for a fantastic £1,800 to the local Weymouth and Portland Charities, proceeds raised from a percentage of the riders entry fee, all eyes now turn to 2022 and what is sure to be another memorable event!