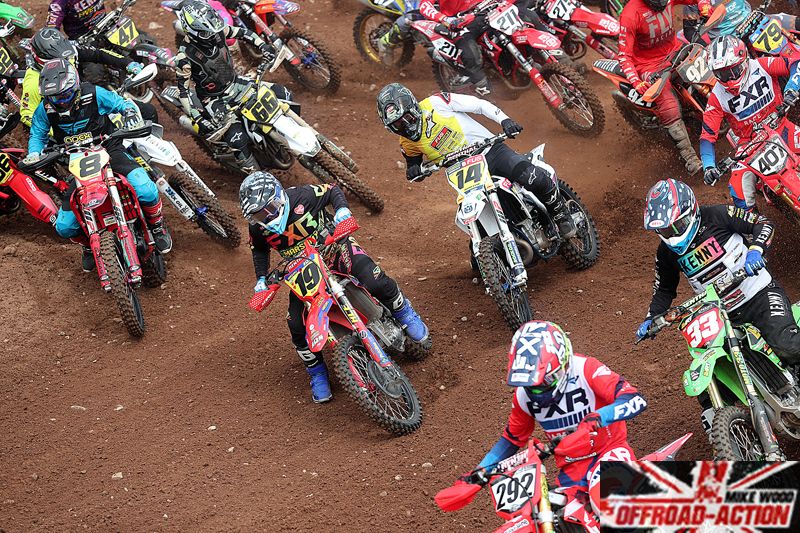 Going back to that tense MX2 class and what a contest it’s proving to be! It’s not only 2T 250cc machine v 250F Four-stroke power but also experience v youthful talent and exuberance. At Norley though it was 2T 250cc experience which was to come out on top as Nev Bradshaw took the overall win. After having had a run out at Foxhills on Saturday in the ACU Revo British Championship, he then travelled North to Cheshire. Setting the fastest qualifying time, Nev then took the opening moto win of the day ahead of Rossi Beard, Shane Carless, Henry Williams, Ray Rowson, Corey Hockey and Josh Peters. In moto two it was then a super FUS battle all the way with Carless stalking Bradshaw before zipping past for the win with just two laps remaining.

In the last MX2 contest, Bradshaw again led all the way from Carless, Beard, Peters, Hockey and Williams. Also in the frame in this one were Josh Coleman, Rory Jones and Josh Canton. In the Championship race, Bradshaw now tops the standings on 468 with Carless 467, Williams 454, Beard 425, Peters 361 and Jones 340 completing a very competitive and exciting top six.

Going into the Norley event, Ashley Greedy held an 11 point advantage at the top of MX1 over defending Champion Luke Burton. And, continuing his fine run of consistent performances, Ashley has now slightly increased that title chasing advantage by another 7 points after taking the round four overall win.

Whilst Burton claimed the opening MX1 moto win of the day with a big, smooth performance, the event did not start quite so well for fellow Championship contender Josh Waterman. Falling on turn three, Josh dropped right down to last place before coming storming back to a hard earned 7th. Ahead of him was Greedy in 2nd, Luke Hawkins, Jayden Ashwell having his best ride of the series so far, James Dodd and Adam Harris.

After that impressive moto one victory, Burton then looked all-set to repeat the feat in the second clash. Getting past early leaders Dodd and Greedy, the FUS Marsh MX rider was comfortable at the front until crashing on lap nine and dropping down to 10th. At the front now though a super tussle for supremacy was developing as Dodd locked horns with Greedy, a battle which was to produce a simply thrilling and dramatic finish! With Dodd looking set for the win, Greedy gave it everything on the last lap and literally passed the stunned Honda rider in mid-air on the final jump, going over the finish line almost out of control but winning by the very narrowest of margins! Taking 3rd in this one was Hawkins from Waterman who had moved up from 14th, the fast starting Jamie Skuse, and Adam Chatfield with Burton getting back to 7th.

Following the disappointment and pain of that moto two crash, Burton got it all together again to take the last MX1 moto at Norley. Once again though the series leader Greedy was right in the mix and taking 2nd with Waterman having his best ride of the day in 3rd. On the podium it was Greedy, Burton and Dodd taking home the prizes and now also filling the top three positions in the standings.

Holding second spot in the 125cc Championship table, Jonathan Roderick-Evans was missing from the Norley action after dislocating his elbow. His absence therefore offered series leader Kieran Banks the opportunity to stretch his advantage at the top and that’s just what he achieved. He was though made to work very hard throughout proceedings by a whole host of equally fast and very determined fellow competitors. In the opening 125cc moto, Lloyd Morgan grabbed the holeshot before being overhauled by first Bradley Tranter then Banks. Taking control on lap seven, Banks winning margin was nearly 8 seconds ahead of his closest title rival Tranter as Morgan took 3rd from Matt Ridgway, Clinton Barrs and Max Lewis.

Despite suffering from a damaged lung, the result of a big crash at Warmingham Lane during the last round, Jordan Wright gloriously grabbed the 125cc moto two holeshot before eventually taking a very gutsy 5th place finish. Taking the victory this time was a very focussed Tranter from Banks, Morgan and Ridgway. Also in the big points this time around were Stuart Owen, Barrs, Harrison McCann and Joel Fisher.

So with one win apiece, it was down to a final moto decider for the Norley 125cc overall verdict. From the off it certainly looked like Tranter was going to take top honours but Banks on the rapid Fantic timed his challenge to perfection. Gating 6th he got up into 2nd by lap four then gradually reeling in Tranter, he moved into pole position with just three tough, demanding circuits remaining. In a late twist, Tranter was then passed by the hard charging Morgan. That meant it was Banks from Tranter and Morgan on the podium and they also form the Championship top three.

The opening two Vets moto’s produced pretty much identical results as series leader Phil Mercer took the win ahead of Gary Davies and Paul Burn whilst the Lane brothers James and Simon hotly disputed 4th spot. It certainly wasn’t all plain sailing though for the defending Champion James Lane. In moto one he fell on the opening turn and had to come from last back to somehow take that 4th place, what a ride that was! In moto two  he then tasted the Norley soil yet again and despite bending his bike dug deep to produce a great recovery ride for a 5th place finish.

In the last one though it was all change as Davis led all the way. Gating 5th, Mercer got up into 2nd by lap five but by this point Davies was clear and racing onto a comfortable win. In the mix again were James Lane, Burn, Simon Lane, Andy Marchant, Sean Smith, Andrew Watkins and Anthony Bennett. Taking 8th overall on the day, Welsh rider and former AMCA Champion Watkins is also now the series leader of the separately scored Vets Over 50 class ahead of Brian Staples, Gareth Dunsford and Mark Hawkins. In that competition, Kev Rogers had been in control winning all three of the previous rounds but is now unfortunately out of action after breaking some ribs then contracting sepsis after a Warmingham Lane crash, get well soon Kev!

2021 AMCA Youth 85cc title series leader Oliver Rigby and his closest challenger Charlie Hucklebridge were at it again during the Norley racing. Whilst Rigby got off to a flyer in moto one, it did not start too well for Hucklebridge though! Thankfully fit after his big Warmingham off, Charlie found himself last off the start before completing the opening lap in 11th. Two circuits later and he was reeling in leader Rigby before finally taking control on lap five. Racing onto victory, Charlie was just three seconds clear of Oliver with Jack Evans, Will Turner, Harry Bebb and Oakley Kettle next up.

In moto two, Hucklebridge made a far better start to thus lead the contest all the way. This time around with Rigby again in 2nd there were some different names in the frame as the likes of Linc Hasted, Logan Jay Powell and Wyatt McGregor bagged some big Championship point’s hauls. With Rigby then producing a smooth start to finish win in the last one ahead of Hucklebridge, McGregor and Cameron Chell it meant that the podium was confirmed. On the day, Hucklebridge had bagged the overall but it’s still Rigby leading the Championship, 32 points clear of his rival as McGregor 384, David 373, Rheanna Morgan-Rogers 301 and Harley Prickett 294 complete the top six.

In the separately scored SW85cc group, Prickett was the leader but has now been overhauled by Oakley Kettle. The difference though is just a single point so with Harrison Davies just a further 13 points in arrears it’s certainly still all to play for in this one. Yes Norley was tough and very demanding but next up it’s a trip to Hawkstone Park on July 4, another very stern test for the stars of tomorrow!