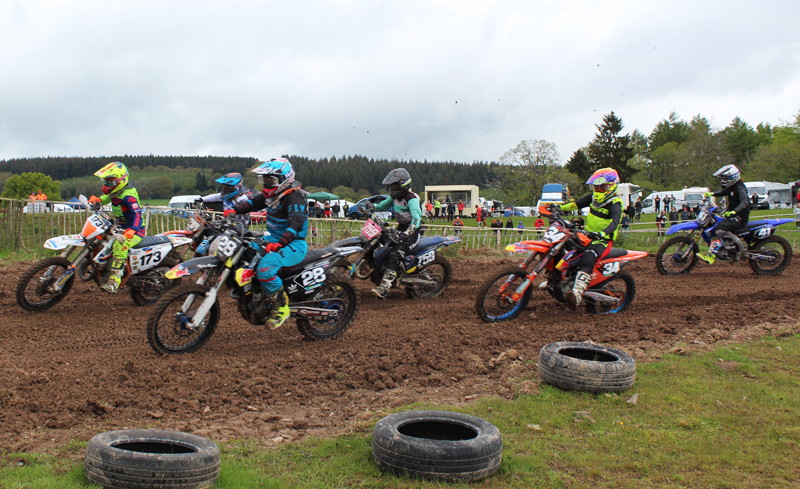 After over a year of waiting The fourth season of the BWMA/AMCA British Womens Motocross Championships sponsored by Westermans International kicked off at the exceptionally well prepared Shobdon Motocross track in Herefordshire. With so many races being cancelled due to the weather the Shobdon club held on until Saturday evening to rip the track revealing a dry almost dusty course for the Sundays racing.

With 24 adults and 20 youth, their biggest entry so far, the prospect for another exciting championship was on the cards. The first four rounds of this year’s Adult championships are for qualification for the top 10 Pro-class positions with the remainder battling it out for the National Womens Championship.

All the focus was on two times British Womens Motocross Champion Chelsea Gowland, now with the full backing of Mark Reece's Team Green Kawasaki, Gowland was looking to continue her dominance of Womens Motocross in the UK, but with the super determined and quick Acerbis Nationals Champion, Wales' Tanisha Thomas joining the championship for the first time, Catherine King and the current 85cc Youth Girls Champion 15 year old Jaysi Austin stepping up on her 125cc Husqvarna all looking to make a fight of it.

Qualification set the scene for upsets and surprises. Chelsea Gowland nailed the pole position with a 3 second gap to Tanisha Thomas who just pipped Catherine King by 0.4 seconds, they were followed by the teenage young guns, fourth place was Hannah Jones from Georgia Potter in fifth and a second down Jaysi Austin in 6th, rounding out the crucial top 10 positions, Grace Bates, Caitlin Newman, Chloe Richards and 15 year old Autumn Jenkinson showing that we are building up an incredible talent of young future stars and the battle for the Pro-class is going to be intense.

Race 1 and it was the hot starting Catherine King taking the Muscle Doctor sponsored Holeshot ahead of Tanisha Thomas with Gowland nicely placed in third. Young Jaysi Austin had starting issues and had to join the race half a lap down so she had a massive task ahead of her, Gowland smoothly took the lead from King after half a lap but behind her Thomas had her eyes firmly fixed on King but both these girls were matching each others times with King holding the position to the end just 4 seconds between them. The real battle was fourth down to seventh with the young hotshots giving their all providing fantastic close racing but it was Hannah Jones who was showing an incredible maturity and speed to take fourth from Georgia Potter, Grace Bates eventually getting the better of Chloe Richards in 7th, but Jaysi Austin rode out of her skin to get from half a lap down to 9th place behind Caitlin Newman and ahead of another ex Youth rider riding a super impressive race Autumn Jenkinson looking really comfortable on her 250f Husqvarna.

Race 2 was delayed following a bad accident in a supporting race which required air ambulance and meant race 3 would be cancelled. It looked like King was heading for another Muscle Doctor holeshot but Tanisha Thomas rounded the corner first ahead of King, followed by Gowland and Jaysi Austin putting her right in the mix. Thomas saw her chance and went all out to keep Gowland at bay after she made the pass on King, a fantastic effort saw Gowland pressing hard for over a lap before sneaking past Thomas, by then she had gapped King who could not make up the ground after Thomas's first few lap sprint, Gowland went on to take the win with Thomas second and king third, Austin was an encouraging and impressive fourth, but the real battle was for fifth with Georgia Potter pushing Hannah Jones the whole race until her persistent pressure paid off and got the pass just one lap from the end, Young Grace Bates could do nothing but sit behind and watch as she had the pace to stay with them but couldn't make a dent in their lead, Caitlin Newman had another steady race for 8th place ahead of Autumn Jenkinson with another impressive ride in 9th and Chloe Richards rounding out the top 10.

The 85cc Youth Class again was shaping up to be another exciting season with more new girls hoping to follow in the path of Jaysi Austin and progress to the top of the British Championship class. Team Green Kawasaki showing commitment again to the future of British Womens Motocross with their second team rider, Beanie Reece looking to take this years championship on their KX85 against the class leading KTM's. Qualification saw Reece take pole Leah Rees-Evans was second followed by Millie Sweeney, Ebony Brown just 1 second down and Brooke Loftus rounding out the top 5.

Race 1 and it was new to the championship Ebony Brown taking the Muscle Doctor holeshot, followed by Hollie Williams then Reece and Millie Sweeney neck and neck round the first corner,Sweeney made Reece work hard but Reece made the pass to give chase to Hollie Williams, reeling her in to slip by on lap 3 with Ebony Brown now in sight, Reece pushed hard to take the lead with a lap to go a fantastic performance and her first championship race win, Brown coming in second with Sweeney third and Williams in fourth, behind them there was exciting battles and some great performances, Amber McGregor just beating the impressive Ellie Davidson for 6th by just 4 seconds at the flag Erin Howes just a few seconds behind them for 9th and rounding out the top 10 Sophie Jones and Checoby Rainey all the way over from Northern Ireland.

Race 2 and the race of the day, with Ebony Brown not starting it was Millie Sweeney that took the Muscle Doctor Holeshot from the young Northern Irish girl Checoby Rainey with Beanie Reece close behind, Reece had her work cut out as she pressured Rainey to take second but by then Sweeney had some distance on her, lap by lap Reece pushed forward and with two laps to go made the pass on Sweeney, done and dusted, but Sweeney was having none of it and summoned up the strength to push back and pressurise Reece, almost taking the lead back on the last lap but Reece held her nerve and took the flag by the slimmest of margins just 0.5 seconds separating them making it two wins for Reece, Checoby Rainey kept a cool head and in the early sprints managed to have a nice cushion over Amber McGregor having a better second race finishing fourth following a titanic battle with Holly Williams and Leah Rees-Evans with only 2 seconds covering the three girls at the flag. Ellie Davidson had another solid ride in 7th place ahead of Erin Howes, Sophie Jones and Lowri Rees rounding out the top 10.

The 65cc Rising Stars class riders were racing with the 85 youth girls and there were some impressive performances from these young riders with the super talented Olivia Reynolds not only dominating the class but showing speed and skill beyond her years and a true Rising Star of the future. Race 1 saw Reynolds take the win but her speed put her 4th in the 85cc Youth class, 2nd was last years champion Poppy Banning followed by newcomers Angelica Bennett and Cameron Mansbridge having a great race between them. Race 2 and again Reynolds was right in the mix with the bigger girls finishing 3rd against the 85's and another win in the 65's this time it was Angelica Bennett taking second with Cameron Mansbridge 3rd and Poppy Banning fourth after a fall.

Round 2 of the BWMA/AMCA Westermans International is on June 13th at Bromyard.

Words and images by Howard Marriott