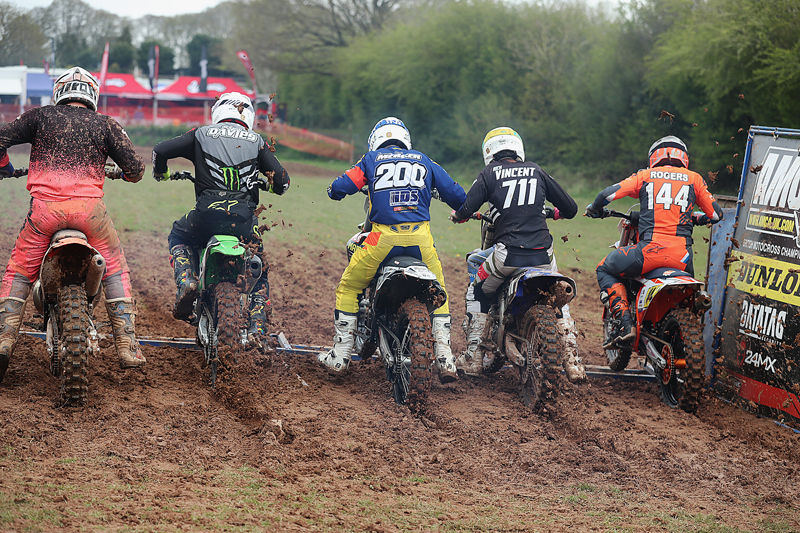 For the first time since 2019, spectators will be able to attend an AMCA British Motocross Championship event as the Uley MXC stage round 2 of the 2021 series on the hillside track at Nympsfield this coming Sunday, May 23rd. And on the evidence of the action served up at Boraston just two weeks ago, they are certainly in for an exciting treat and at a cost of just £5 Adults with Children U12 and OAP’s being charged £2, it’s an absolute bargain!!

At Boraston, on a wet track which then dried out to form a maze of intimidating ruts, the riders still gave everything and so much more in the chase for early Championship points. As the season progresses and the circuits hopefully become drier, that quality, speed and intensity in the racing on display will only get even more impressive!!

In this super series powered by Datatag and supported by Dunlop, Ashley Greedy took the top honours in MX1 by going 2/2. Bagging the race wins were Josh Waterman and James Dodd but it was Championship debutant Luke Hawkins and defending Champion Luke Burton who joined Ashley on the podium. With both Luke Dean and James Mackrel failing to score expect these lads and many others to come storming back during round two!

Having already bagged MX1 and 125cc titles, Shane Carless was simply on fire at Boraston as he goes for MX2 glory in 2021. Shane started with two big wins as Henry Williams and Nev Bradshaw chased him home on each occasion. The very experienced Ray Rowson was next up as Rossi Beard, Alfie Jones, Josh Peters, Adam Collings, Lewis Dowdeswell and Jaydon Murphy complete the early top ten. Outside that group and a little further down the leaderboard is Josh Coleman, a rider who has already competed at Nympsfield earlier this season and will be desperate to fight back.

In the 125cc series, Bradley Tranter tops the early standings after scoring his maiden AMCA Championship overall win at Boraston. Taking 2nd on the day was another AMCA debutant Kieran Banks on the very fast Fantic machine. Expect Kieran to be really twisting that throttle to the max again this Sunday! Based on a couple of very quick starts, Jonathan Roderick-Evans currently holds 3rd ahead of Tom Fish, returning to race after a few years away from the sport. In this great class, Harrison McCann, Jack Timms, Jordan Wright, Jamie Smith and Bailey Johnston are next in the standings. Starting the series with an opening moto DNF, Matt Ridgway a probable favourite in this class will be looking for a very big points haul at Nympsfield to get himself back into Championship contention.

Having already bagged some AMCA titles, Phil Mercer has now returned to the Association for 2021 and started in style. Phil took both moto wins at Boraston being chased home on each occasion by multi AMCA Champion Gary Davies. The current AMCA Vets title holder James Lane had to settle for 3rd overall as Kevin Rogers, Andrew Watkins, Sean Smith, Richard Tudor and Richard Vincent were next best.

Another new kid on the block was to score the top Youth 85cc honours at Round 1. With two very impressive moto wins, Shaun Murphy topped the podium ahead of Charlie Hucklebridge and Kalvin Kelly. Despite the difficult early conditions, the kids certainly gave it their all on the very imposing circuit as Oliver Rigby, Jack Davis, Lewis Proud, Alfie Crealock-Lovell, Wyatt  McGregor, Harry Bebb and Oakley Kettle also started the new series with some very decent points hauls.

So if you are looking for the first taste in 2021 of some quality motocross action, get along to Nympsfield in Gloucestershire this Sunday, you certainly won’t be disappointed! The circuit can be found on the unclassified road between Nympsfield village and Forest Green, postcode GL10 3UJ.