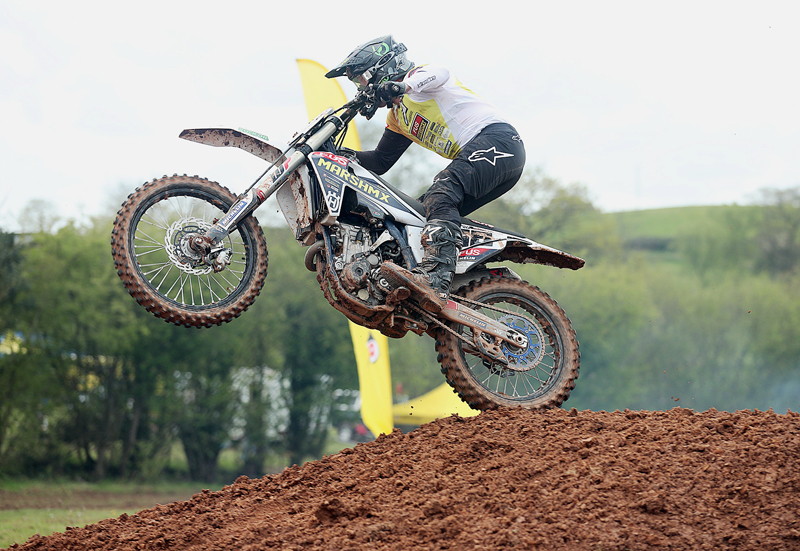 Hosted by the very hard working Teme Valley MXC, Boraston in Shropshire was the venue for the eagerly awaited opening round of the AMCA British Motocross Championship powered by Datatag and supported by Dunlop. With all the classes stacked full of quality, the typically unpredictable British weather though failed to play ball and read the good times script!! Following 24 hours of almost continuous rain, the circuit had become an absolute quagmire thus even creating doubt amongst some riders if the event would be able to go ahead!

Thankfully though the big watering can in the sky stopped pouring and conditions dried remarkable quick to thus enable this Championship round  to be completed. Because of the Covid pandemic some of the planned pre-series Championship qualifiers had been cancelled so this meant that the final places on the series start grid for MX1 and MX2 were still to be decided on the day before the hunt for the 2021 AMCA titles could commence.

So after prolonged practice and qualifying sessions and a slight rerouting of the circuit due to the awfully heavy going, it was finally time for the real action. Yes the track was naturally sticky, technical and very knarly creating a whole maze of big, intimidating ruts but the riders were undeterred and put on a great show, pushing their effort and energy levels to the max in a bid to lay down a marker for the rounds to come! Well done to all riders and the organising Teme Valley MXC for persevering and getting the job done!

In the two blocks of planned racing Ashley Greedy(MX1), Shane Carless(MX2), Bradley Tranter(125cc), Phil Mercer(Vets) and Shaun Mahoney(Youth) took the respective overall wins and are now the riders who will hold the series red plates going into round 2 at Nympsfield.

Josh Waterman and James Dodd took the moto wins at Boraston but it was Ashley Greedy who bagged the overall win with a brace of 2nd places. Having recently switched for FUS Marsh MX Husqvarna over to LHRT Kawasaki, Ashley was joined on the box by Luke Hawkins and Luke Burton, the defending AMCA MX1 Champion.

Fast Welshman Greedy was to quickly stamp his authority on MX1 moto one as he led Burton, Mark Young, Hawkins, Jamie Skuse and James Mackrel. Greedy continued to hold control right up until lap 7 when he was relieved of the lead by Waterman. Earlier in the moto, Josh was down in 8th but timed his ride to perfection before claiming the first win of the season. Suffering from arm pump, Greedy held on to still bag 2nd from Burton, Hawkins and Adam Chatfield, a late addition to the class after replacing Tommy Alba on the Ultimate Wheels/Thunderroad Honda team. Having an eventful opening ride of the new season was James Dodd, after stalling at the start and suffering a sticking front brake, he then stormed back with a strong performance to get home in 9th.

Jamie Skuse was the quickest rider away in moto two but by the completion of the first circuit, Dodd was in control and that’s where he remained to bag a great win. Taking 2nd again was Greedy from Hawkins and Burton who had worked his way up from 10th then getting himself locked into a great battle for Chatfield. Also inside the top ten were Skuse, Adam Harris, Corie Southwood who had crashed on turn one in the opening clash, Waterman suffering from a bent front brake disc and Will Hughes.

Having already picked up the MX1 and 125cc titles in successive seasons, Welsh ace Shane Carless started the 2021 MX2 AMCA Championship campaign in spectacular style with a brace of comfortable moto wins. Joining on the Boraston podium was young Henry Williams and Nev Bradshaw on the 250cc 2T Husqvarna.

This class featured an intriguing mix pitting experience v youth and the youngsters certainly played a big part in Sunday’s racing. Rossi Beard also two-stroke mounted took 5th overall including a moto two when he came from last back to a superb 8th. Also in mix was Josh Peters who got home in 7th overall on his AMCA Championship debut.

Brooklyn Evans grabbed the moto one holeshot and led the charge for two laps before Carless who had earlier comfortably posted the fastest qualifying time came through to take control. With Henry Williams holding off Nev Bradshaw in a super battle for 2nd, Beard started his maiden AMCA Championship season in style by scoring a great 4th just ahead of the very experienced Ray Rowson. Also starting with a strong ride in this first MX2 clash of 2021 were Jaydon Murphy, Lewis Dowdeswell, Rory Jones, Josh Coleman and another debutant Josh Peters.

With Beard falling on the opening turn of moto two and with it all now to do, Williams and Bradshaw briefly took turns to lead the way before the super-fast Carless came gliding past! Having stormed to a massive 30 seconds victory in moto one, Carless was right on it again in this one with Williams in 2nd and his FUS Marsh MX Husqvarna teammate Bradshaw proving to be his closest challengers. With rain again falling and making conditions a little tricky, Rowson took 4th from Alfie Jones, Adam Collings,young Peters and Beard, getting back up to a super 8th following his earlier tumble.

There was to be a new name standing on top of the 125cc Championship podium on Sunday as a delighted Bradley Tranter scored his maiden overall win with a superb 1/2 scorecard. Runner-up was AMCA debutant Kieran Banks on the very rapid Fantic machine. The fast starting Jonathan Roderick-Evans claimed 3rd. After a long layoff from the sport, Tom Fish returned in style by taking 4th overall.

Despite being forced to jump aboard his spare bike, Tranter took victory in the first 125cc moto of the season after Jonathan Roderick-Evans had claimed the initial holeshot. Having his maiden AMCA Championship ride, Banks grabbed third from Bailey Johnston, Jamie Smith and Jack Timms who had to work very hard for his first points of the new season when finding himself down in 15th during the early stages.

Jordan Wright and Tranter were the early pace setters in moto two but Banks on that very quick Fantic machine was already charging hard. By lap four, Kieran was hitting the front and quickly increasing his advantage before racing on to earn his first AMCA Championship win. Whilst he was naturally delighted with that result, the biggest smile of the day certainly belonged to Tranter who by finishing 2nd was also confirmed as the overall victor in 125cc round one, well done Bradley!! With Roderick-Evans also confirming a place on the podium, Wright, Matt Ridgway, Tom Fish and Harrison McCann finished their day with a big points haul. For both Ridgway, who’s bike mysteriously ground to a halt in moto one when holding 3rd and Wright who could only manage 15th, this moto two result proved particularly crucial.

Factory Phil Mercer was back in town on Sunday and despite being very close to his 50th birthday showed that he has not lost any of his old style and speed. Although Paul Burn grabbed the holeshot in both moto’s, it was Mercer who comfortably took the wins ahead of Gary Davies. Taking the final step on the podium was the defending Champion James Lane.

Paul Burn led the opening Vets clash of 2021 for three laps before being passed by both Mercer and Davies. Lap seven and Burn then disappeared from proceedings. At the front, Phil in his own, smooth untroubled style was cruising to victory as Gary Davies had to see off the very determined Lane Brothers, James and Simon. Next up was Kevin Rogers, 3rd in the 2020 Vets series, Richard Tudor, Andrew Watkins and Sean Smith.

Burn again was quickest to react off the start in moto two, this time leading for three laps before as per the first clash then being overhauled by Mercer and Davies. On this occasion though, Burn held on to get home in 3rd with the reigning AMCA Vets Champion James Lane. For Simon Lane though this moto was to prove disastrous as his Husqvarna’s clutch expired and overheated on lap 5.

New rider in the AMCA series Shaun Mahoney was in simply fantastic form on his debut at Boraston, comfortably winning both moto’s. After briefly leading moto two, Charlie Hucklebridge eventually scored a 4/2 to earn a richly deserved 2nd overall ahead of Kalvin Kelly in 3rd.

It was Oliver Ruddock who claimed the moto one holeshot before Shaun Mahoney found a route through on a typically frantic opening lap. From here onwards it was Mahoney all the way as Kalvin Kelly grabbed third from Charlie Hucklebridge, Alfie Crealock-Lovell, Lewis Proud and Oliver Rigby.

Hucklebridge was the quick kid off the block in moto two leading for a couple of laps before the fast Mahoney came through. Comfortably then racing onto victory, Hucklebridge remained in a strong 2nd spot despite suffering from rear brake fade on his KTM machine. Right in the mix in this second clash were Rigby,Jack Davis, Kelly, Proud and Wyatt McGregor. In the separately scored Small-Wheel 85cc class, Oakley Kettle was the top performer ahead of Harley Prickett and Caiden Baillie.