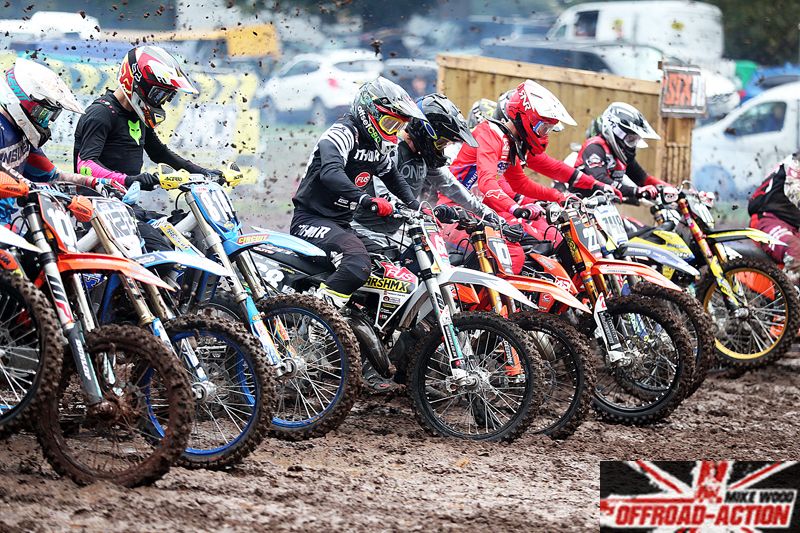 Following 24 hours of non-stop rain, the prospects for the penultimate round of the 2020 AMCA British Motocross Championship actually taking place at Long Lane on Sunday appeared very slim! However throughout that period, the organising Wrekin MXC were always adamant that the event would definitely go ahead, a very bold statement to make considering the awful weather! To their ultimate credit though, the Club’s judgement proved to be spot on with track conditions totally raceable and the meeting able to be completed so well done to everyone involved.

After the deluge of wet weather, the rain had thankfully ceased in the Telford area before the commencement of Sunday’s proceedings. Yes the going was naturally heavy early on but the sand-type prevailing soil had soaked up the water forming a whole host of ruts and line selection helping to produce some close, exciting racing as the day unfolded. In MX1, having already bagged a maximum at Long Lane earlier in the series, Luke Burton started the day with a classy gate to flag victory in the opening clash. Taking 2nd was a new boy to AMCA competition, James Mackrel from Northern Ireland who got home ahead of Tommy Alba, Neville Bradshaw, Ashley Greedy, Josh Waterman, Scooter Webster and Luke Hawkins. The day did not start too well though for expected front runner James Dodd who found himself a distant last in the early stages, eventually getting home in 16th.

Burton took victory again in moto two, moving up from 4th and passing the hard charging leading trio consisting of another AMCA debutant Luke Hawkins, Neville Bradshaw, racing his big Red CR500 Honda in its final event and Tommy Alba. With Burton taking control on lap five, early pace-setter Hawkins went down to 6th as Bradshaw got home in 2nd despite very close attention from Alba whilst Mackrel struggling with a reoccurring shoulder injury was 4th. On this occasion, Burton’s closest title rivals Greedy and Waterman had to settle for 5th and 7th places respectively.

What a great race the final MX1 moto of the day was to be as Mackrel led for eight laps. In the early exchanges, Hawkins and Greedy were putting the pressure on with Hawkins getting through but all eyes focussed on Burton as he was on a serious charge after gating in 8th. Gradually picking off his rivals, Luke moved into 2nd on the final lap and was just a couple of bike lengths down on winner Hawkins at the flag. So on the podium it was Burton taking the top step joined by Mackrel and Alba earning a richly deserved maiden AMCA podium. In the title chase, Burton leads the way on 553 points from Waterman 509, Greedy 502, Adam Chatfield 471 and Dodd 461.

Although Jamie Wainwright was to suffer his first defeat of the season in MX2, he still took the overall win on the day and thus extend his Championship advantage. Slipping off on the opening lap of moto one, Jamie was quickly back on-board his KTM, only losing a couple of places and dropping down to 7th spot. At the front, both Henry Williams and Ryan Crowder took turns to lead before Williams finally stamped his authority on proceedings. On a charge, Ray Rowson returning from injury then came through to move up into 2nd and insert heavy pressure on Williams in a scrap that raged all the way to the chequered flag. Following his rare, early slip, Wainwright took 3rd from Crowder, Luke Dean, Rory Jones and Jordan Eccles.

Unfortunately in the first attempt to run MX2 moto two, Rowson crashed heavily requiring medical attention, get well soon Ray! In the rerun, Jansen Day grabbed the holeshot before quickly being replaced by Jordan Eccles. Making no mistake on this occasion, Jordan sailed on to nail his first AMCA Championship moto win as Wainwright took 2nd after gating 5th. The super consistent Williams, Crowder, Josh Coleman, Lewis Dowdeswell and Day were next up.

Stretching that throttle wire to the max, Crowder on the 2T KTM grabbed a glorious last MX2 moto holeshot but before the completion of the opening lap that man Wainwright was on his tail. Quickly moving through, Jamie put the hammer down to then glide onto a big win as Crowder followed him home. Williams completed another good day earning 3rd just ahead of the FUS Marsh MX Husqvarna boy’s Eccles and Dowdeswell. That left the MX2 podium featuring some rather familiar faces as Wainwright, Willams and Crowder took home the honours. In the Championship table, Wainwright on 592 points looks on course to retain his title with Crowder 520, Williams 506, Coleman 482, Eccles 450 and Day 440 chasing.

One rider who would certainly not have been fazed by the wet, heavy track at Long Lane is Matt Ridgway. Using all of his top level Enduro experience to the max, Matt posted the fastest 125cc qualifying time and proved to be a major contender when the racing started, eventually taking the overall runners-up spot behind Shane Carless. In 125cc moto one, Matt grabbed the holeshot and led for seven laps before Carless came through for the win. Also in the mix during the opening clash were Travis Steels, Jimmy Margetson, Jonathan Roderick-Evans, Clinton Barrs and Aaron Colley. Indeed that 4th place earned by Championship contender Margetson was particularly impressive after initially gating down in 18th.

After that comeback, Jimmy was quickest away in moto two before being passed on lap one by both Carless and Ridgway. In this one, Steels took 4th from Damon Strydom who had gone out of the opening clash when in 8th place. With Matt Ridgway in 2nd, his brother Jordan was also right on it, taking 9th just behind Barrs, Roderick-Evans and Jordan Wright.

In the final 125cc moto it was Carless all the way from Matt Ridgway, Strydom, Margetson, Steels and Luke Newman. On the Long Lane podium that super maximum man Carless took top slot from Ridgway and Margetson. With that haul of another big 150 Championship points, Shane sits on a nice total of 582 from Margetson 515, Strydom 448 and Steels 435. Having bagged two successive podiums, Ridgway is in 8th and still in with a mathematical chance of earning a final medal position.

So far this campaign, the fast starting Paul Burn has provided the major threat to the dominance of the Lane Brothers in the AMCA Vets contest. But on Sunday, Paul was a non-starter as James and Simon again took the top two positions to thus almost guarantee that they will be earning the gold and silver medals in this class. Electing to ride a 250cc 2T Husqvarna instead of his trusty, big 4T mount, series leader James looked set to start round four with a win by coming through to pass his brother Simon with two laps remaining of moto one. However in a late twist, Simon fought back to retake the lead on the final circuit and with just one turn remaining. Taking 3rd was Kevin Rogers from Anthony Bennett, Brian Staples and Andrew Watkins.

In Vets moto two, the Lane boy’s again swapped positions before James claimed the win after Simon had suffered a late fall. Taking 3rd was Rogers with regular top ten finishers Bennett, Staples, Rich Tudor, Watkins and John Barnes in the mix. Kev Rogers then got the final Vets moto holeshot before being passed by Simon Lane and eventual  winner James Lane. Having his best ride of the day, Barnes took a great 3rd in this one just ahead of early leader Rogers. On the podium it was James, Simon and Kev Rogers. That result means James tops the title table on 584 points just 15 ahead of Simon whilst Rogers has now leapfrogged Burn up into 3rd on 477.

Going into Sunday’s event, just 4 points separated Yarin Evans and Joel Fisher at the top of the Youth 85cc standings. In a dramatic moto one though that was to change as Evans found himself in a distant last place on the opening circuit. With a terrific ride though, Yarin got right back up to 4th behind winner Fisher, Lewis Roden and Caleb Greaves with Oakley Kettle, Oliver Rigby and Tyler Smith in the frame.

After that moto one effort, Evans then grabbed the holeshot in both moto’s two and three before Fisher came through for the wins. On each occasion, Roden got home in 3rd and Rigby 4th. On the podium it was Fisher, Evans and Roden who are also the title chasing top three.  Going into this weekend’s final and deciding round, Fisher now tops the table 9 points clear of Evans with Roden a further 63 points in arrears.