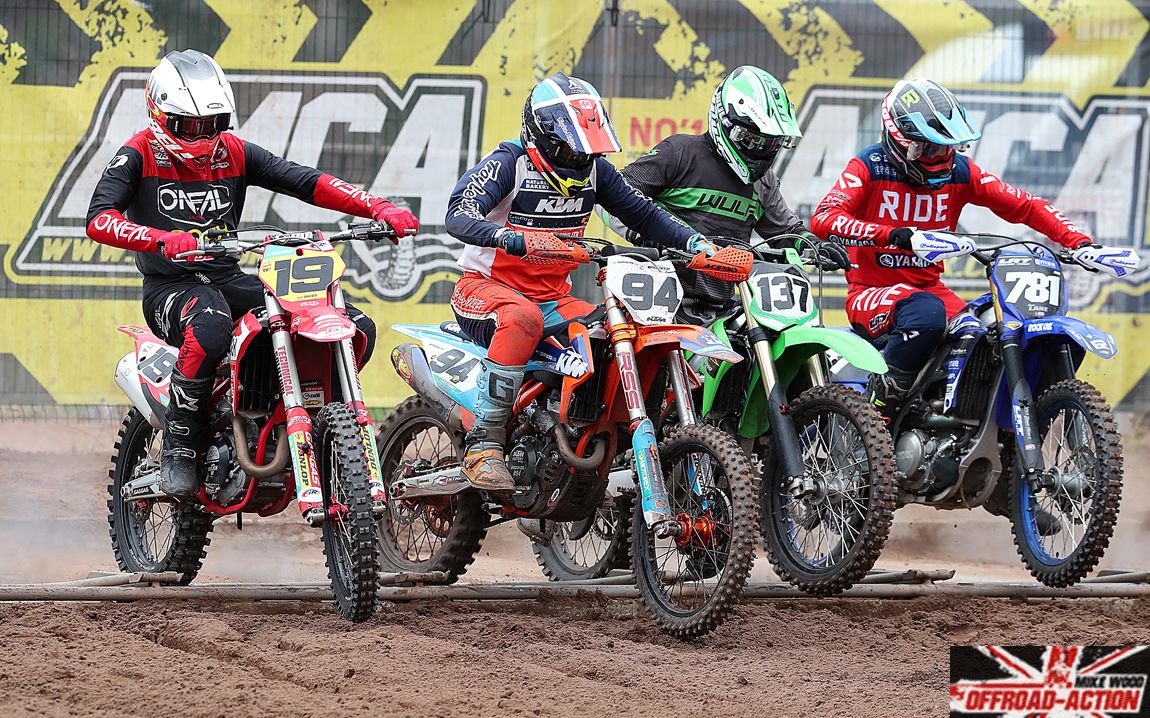 Just like marmite, the iconic Hawkstone Park is a circuit that divides opinions and one which riders either love or hate! Last Sunday, the famous old location hosted round four of the AMCA British Motocross Championship sponsored by Dunlop and the Shropshire going was to be in absolute prime condition. Displaying their affection and love for Hawkstone, Matt Bayliss (125cc), Gary Davies (Vets) and Freddie Gardiner (Youth 85cc) all scorched to maximum points whilst Luke Burton (MX1) and Nev Bradshaw (MX2) were also overall winners on the day.

The first rider to go through the card was 125cc Championship leader Bayliss on his Darjen Contractors GasGas. Grabbing the holeshot though in moto one was a rider who has completed plenty of laps around Hawkstone as Kristian Whatley controlled the early proceedings ahead of Joel Fisher, Luke Dean, Jordan Ridgway and Bayliss. By lap three, Bayliss was up to 2nd and took just one further circuit to become the new race leader and ultimately the victor. Pushing Matt all the way to the finish was Whatley, just 3 seconds down at the flag as Fisher, Charlie Griffiths, Dean, Chris Povey, Liam Gale and Ridgway were next up.

In both of the remaining 125cc moto’s, Bayliss was in fantastic form, leading from gate to flag, his last race winning margin being a massive 29 seconds! On each occasion, Whatley was the runner-up with just about all of the above mentioned riders right in the mix along with Louis Vincent and Jordan Wright. Making his debut for the LRT Race team, Wright certainly had an interesting day. Falling in moto one and having to come from 31st up to 13th, he then went 7/8 for 7th overall. So on the Hawkstone podium it was Bayliss from Whatley and Dean. In the Championship standings, Bayliss now holds a 43 point advantage ahead of Dean with Povey moving above Fisher and up into 3rd. After starting the day with a 3/6, young Joel had a last moto DNF, going out on lap three which means that he has slipped one place in the main table although he does still top the separately scored 125cc Youth Championship from Vincent and Yarin Evans.

Maximum man number two was the very experienced Apex GasGas UK Vets rider Gary Davies. Racing on what is just about home territory, Gary was certainly turning on the style, seeing off his main title chasing rivals Phil Mercer and Shane Holmes in three very entertaining moto’s. For defending Champion Mercer though the day did not start well, already competing with an injured hand he was forced off into the chestnut paling during qualifying thus suffering yet more pain!

Back to the racing though and in moto one, Davies led all the way as Mercer moved up from 4th to finish as runner-up with Holmes, James Lane, Simon Lane and Jamie Powell out on 2T Fantic next up. Vets moto two was to then arguably produce the race of the day as Davies, Holmes and Mercer disputed the leadership for just about the entire duration. With the lead changing hands, Davies even dropped to 3rd before regaining the advantage only to then stall his engine and have it all to do yet again! In determined fashion, Gary did get back to the front with Mercer in 2nd and Holmes riding a 250F and with a horsepower disadvantage when attacking that hill having to settle for 3rd. As per the opener it was also the same names in the frame and included Robert Lewis, Sean Smith, Matt Chaplin and Brian Staples.

In the last Vets tussle, Davies led all the way despite intense pressure early on from Mercer. The Hawkstone results now mean that it’s very tight at the top of the Championship standings with Davies the new leader just a single point clear of Holmes and Mercer only a further 8 points in arrears. Mercer though does lead the Vets Over 50’s class with Smith and Staples, despite a heavy last moto tumble next up.

Despite only being a wild-card entrant at Hawkstone, Youth 85cc competitor Freddie Gardiner was the final maximum points winner. Producing a motocross masterclass, Gardiner was pure quality on his way to three faultless gate to flag victories in the process inflicting the first defeat of the season for Youth 85cc series leader Ollie Bubb. The Passion Racing GasGas rider was though an equally comfortable runner-up in all three moto’s as the combination of Wyatt McGregor, Sebby Moore, Jack Evans, Will Turner and Travis James proved to be the closest challengers to the dynamic front two.

Even at its best, Hawkstone is an imposing venue for the young aces on their small 85cc machines so well done to everyone for the manner in which they bossed and expertly attacked the sandy circuit. On the podium on Sunday it was Gardiner from Bubb and McGregor who really produced a trio of very determined performances to thus fully deserve the eventual 3rd overall . In the Championship table, Bubb holds a nice 65 point advantage ahead of Moore, Evans, Turner and Oakley Kettle who was a non-starter on Sunday. Lying 6th in the main series is Oliver Bebb and he’s also the SW85cc class leader from Harley Piper and Lewis Day.

After winning at Culham, Nev Bradshaw has not appeared at an AMCA Championship since round one but was back for more MX2 action at Hawkstone, and he was certainly to be right in the thick of the action! It started in moto one, gating 7th he got up to 2nd by lap three then proceeded to reel in the very fast leader Henry Williams. In a super finish, Nev closed the gap right up only for  Williams to cleverly deny every move by the experienced star to thus take a great win by the narrowest of margins. Getting home 3rd was Jake Preston from Rory Jones, Corey Hockey, Howard Wainwright, Tommy Alba and Zac Stealey. Taking 9th was the MX2 series leader Shane Carless, enduring a bit of a nightmare, the Welsh ace fell twice and certainly had to work hard for his points.

Regaining his composure, Shane got it all together for moto two and grabbed the holeshot leading for two laps before Bradshaw came through then racing onto the win. With another quality ride, Williams and Preston were next up in this one as consistent performers Jones, Alba and Hockey got right in the top end mix. In what was a stacked MX2 line-up, the last moto of the day then proved to be arguably the most dramatic as both Alba in 8th and Bradshaw 14th did not make the best of starts and had a bit of work to do! Meanwhile at the front, Carless was comfortably in control and on his way to bagging his compulsory victory by leading all the way as Williams initially held 2nd with Preston in 3rd. But as the contest unravelled and in a serious 2T raid, by lap four Alba was already up to 4th with Bradshaw right on his tail before the pattern changed on the final circuit. Passing Preston, Alba then with two corners remaining dived hard under Williams, the Apex GasGas UK youngster tasting the sand and dropping to a 5th place finish. So in that frantic conclusion it was Alba in 2nd, Preston 3rd and Bradshaw 4th, that last race result meaning that Bradshaw took the overall win. Joining him  on the podium was Williams and Preston, enjoying his best result of the season so far. Although Carless did not make the box, he has slightly increased his lead at the top of the standings as Callum Baldwin continues to be the MX2 Cup pace-setter with Josh Peters, Adam Cook and Cory McShane challenging.

FUS Marsh Geartec Husqvarna pilot Luke Burton was in fantastic MX1 form at Hawkstone Park taking a richly deserved overall win ahead of series leader Josh Waterman and wildcard Jayden Ashwell who had set the fastest qualifying time. In moto one though it was Tony Craig who led the initial charge only to crash on lap one when exiting the bomb-hole. Quick to take advantage, Burton hit the front and there he remained all the way as Waterman drove past Ashwell and James Dodd to bag 2nd with Craig recovering to get home 5th from Ashley Greedy. Moto two and although Dodd got the initial holeshot, Burton was soon in control before racing onto victory with Waterman bagging another 2nd from Dodd whilst Ashwell had to come from 8th up to 4th.

The last MX1 moto was to definitely prove to be the most dramatic as Ashwell got the holeshot with Burton down in a distant 7th. At the front, Greedy having his best ride of the day then took control but appeared far from happy with his machines performance, gesticulating to his pit-crew. For three more laps though Greedy remained in contention for the leadership despite having Ashwell, Dodd and Waterman all snapping at his rear wheel before eventually then slipping back to 5th place . It was Dodd’s turn to now hit the front only to be quickly passed by Ashwell. While all of the action was going on out front, Burton was rapidly catching the leading pack and got right back to a fantastic 3rd behind eventual winner Ashwell and Waterman.

That result meant that Burton took the overall from Waterman and Ashwell whilst in the Championship table, Josh with those three very consistent rides has increased his advantage at the top to 13 points with Dodd chasing hard. With Jake Shipton missing Hawkstone due to injuries sustained at the recent Patchquick Trophy event, the race for the 2022 AMCA title looks like now being a three-way fight featuring Waterman, Dodd and Burton. Seventh in Sunday’s MX1 class was Josh Canton and he also tops the separately scored Cup competition.